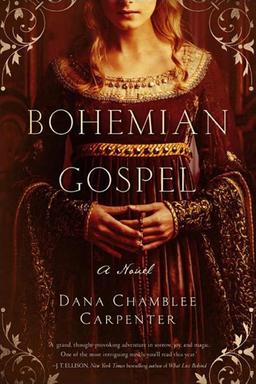 Now here’s something interesting that may have slipped past most BG readers… a gothic fantasy set in 13th-century Bohemia that has been getting some excellent reviews. Publishers Weekly calls it “A deliciously creepy debut… [with] an intricate world full of terrifying details,” and Kirkus Reviews sums it up as “Part history, part horror, part love story… does a good job of interweaving history with mythology and the supernatural… Brings the Dark Ages to strange and bewitching life.”

Set against the historical reign of the Golden and Iron King, Bohemian Gospel is the tale of a bold girl with unusual gifts who finds herself at odds with supernatural forces in a world rich with superstition. Well worth a look.

Thirteenth-century Bohemia is a dangerous place for a girl, especially one as odd as Mouse, born with unnatural senses and an uncanny intellect. Some call her a witch. Others call her an angel. Even Mouse doesn’t know who — or what — she is. But she means to find out.

When young King Ottakar shows up at the Abbey wounded by a traitor’s arrow, Mouse breaks church law to save him and then agrees to accompany him back to Prague as his personal healer. Caught in the undertow of court politics at the castle, Ottakar and Mouse find themselves drawn to each other as they work to uncover the threat against him and to unravel the mystery of her past. But when Mouse’s unusual gifts give rise to a violence and strength that surprise everyone — especially herself — she is forced to ask herself: Will she be prepared for the future that awaits her?