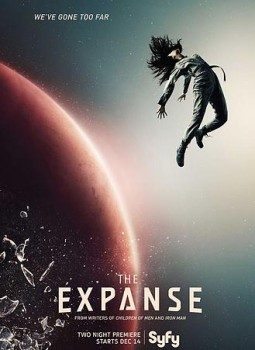 So, yes, I was a lucky dog and got to visit the set of The Expanse while they were shooting Season One, and I recently attended the cast and crew premiere of the show here in Santa Fe.

Given my good fortune, it seemed only right that I find some exclusive content to share with readers of Black Gate, so here it is.

Elias Toufexis plays Kenzo, a character that has a lot of fans concerned because he’s not in the books. In the interview we discuss how this character was developed especially for Elias by James SA Corey.

We also say as much as we can say about the show, which is mostly stories and anecdotes of what was going on behind the scenes. This is content you won’t get anywhere else!

While I had him on Skype, we also discussed his career as a video game actor in franchises such as Deus Ex and FarCry. To finish off the interview, I asked him all sorts of basic questions about how one builds a career as an actor, and he gives some excellent advice. 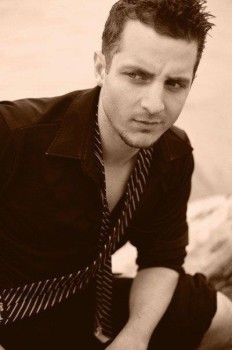 An Interview with Elias Toufexis

As always, below are the time stamp bookmarks that allow you to navigate to the parts of the interview that interest you most.

We begin by talking about Kenzo, Elias’s character on The Expanse, who does not appear in the books.

1:32 How the character was created by James SA Corey himself, especially for Elias.

3:08 Elias’s audition process for the show, including the parts he didn’t get and his reservations when he was told a part had been written for him.

4:55 Contrasting The Expanse’s respect for the actors to other projects.

6:10 We discuss the sets for the show and its high production values.

7:00 A funny story about the dedication of the writers on the show.

8:01 The quality of the cast and why Elias wanted so much to be a part of it.

9:23 On the budget, and why it’s rare for television, especially science fiction.

11:42 When to expect Elias’s character to appear on The Expanse.

12:35 We gush about how incredible the show looks already.

13:09 A discussion of all the positive reviews the show has. (Can you tell we’re very excited about this show?)

13:45 Contrasting The Expanse to Game of Thrones as we talk about adapting books with a large fanbase to television.

15:23 Using Game of Thrones as an example of how unique the television deal for The Expanse is. The writers have much more creative control than is usual.

28:38 You heard it here first, Elias’s first scene on The Expanse.

16:34 How Ty Franck (James SA Corey) already knew about Elias before casting the show: His extensive resume as a video game actor.

18:44 How much of the video game animation is now done by actors, a discussion of performance capture.

19:22 How motion capture and voice acting are done for video games.

21:57 The star rating system in video games. Elias is one of the top rated video game actors.

22:57 Can a video game actor be too famous for his own good?

24:15 The evolution of performance capture and video game acting.

24:51 The hours involved in video game acting versus film and television.

25:52 Comparison of a typical day on a video game set versus a film/television set. The hours required for film and television are much longer than people realize.

29:20 Some time-saving tricks of the trade when filming a video game.

30:47 The coolest piece of technology you’ve ever heard of. It’s used to pick camera angles in a video game.

31:33 Elias discusses the challenges of acting with minimal sets, and how much of the game he’s able to see when working.

32:49 The challenges of acting with a full set on television/film.

1:01:08 How much the characters resemble the actor.

33:54 Elias’s story, how he got started in acting, from theater school to a touring theater company.

36:53 Moving to New York to get more work (he recommends not doing this.)

37:43 Making a living with a day job while trying to build an acting career.

38:38 One of the best actor stories about quitting a day job for an audition.

40:07 Moving to Vancouver, one of the most popular cities for filming television shows and films.

41:25 Moving back to Toronto and continuing to build a career.

41:40 The percentage of his theater classmates who were able to make a career for themselves in acting. Elias discusses talent vs. perseverance.

42:56 Challenges of working in Canada.

43:41 Television and film versus stage acting.

44:20 Budgeting money in order to take the projects you want.

47:51 Some advice on agents and booking jobs.

48:42 Auditioning, a requirement for all but the very big name actors.

52:31 An actor’s work schedule, Elias discusses never knowing what the next few months will bring, and building his career regardless.

54:51 The likelihood of getting rich as an actor, some honest advice.

56:18 Managing expectations of fame and fortune.

57:42 Advice on learning to act and breaking in.

Emily Mah is a writer and the owner of E.M. Tippetts Book Designs, a company that provides formatting, cover design, and editing services for independent authors and publishers. Her last interview for Black Gate was with Heather Hildenbrand.

I’ve had the first book to this series sitting on my self for a while, i just can’t seem to get to it. I blame comic books for becoming a new interest of mine.

I found the first book slow going to begin with, but once the major plot points opened up, I was hooked. I’d already known the world and the milieu, but not the macguffin. It’s a good one!

Glenn — comics are a fine choice, if you’re going to be distracted by something. 🙂

What are you reading?

A lot of stuff. My favorite is Usagi Yojimbo by Stan Sakai. I’m also reading IDW’s Star Trek ongoing series ( it fills in the gaps between the Abrams movies), IDW’s ongoing TMNT series, A samurai jack comic that picks up after the show (this one just ended), various Carl barks and don rosa Disney comics, Groo by Sergio Aragones, and I bought a lot of the Star Wars dark horse material before they lost the Star Wars license.

On top of all that I have a Marvel Unlimited subscription that gives me digital access to almost every marvel comic ever published. and I pick up a random volume 1 of different series like Autumnlands by Kurt Busiek and I recently tried some of DCs New 52 line ( I didn’t care for what I read of that.)

Whew yeah I think that’s most of it.