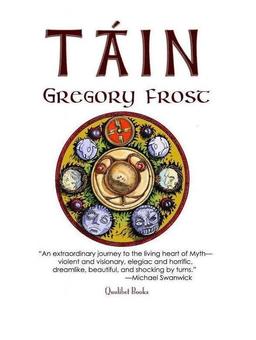 Two months ago, in early October, I wrote a brief article about the Cú Chulainn novels of Gregory Frost, both published by Ace and both now long out of print. Several readers commented on how much they’d enjoyed them, and Eugene R. said “Frost… uses a dry, understated wit that really underlines the heroic and tragic parts of the original legends.” On November 20th author Gregory Frost dropped by to say:

Just wanted to alert any of you who are interested that Táin and Remscela are back in the world as ebooks, currently exclusively through Book View Cafe. Táin was just this week re-released, and Remscela will be out in December.

On his blog, Frost goes into considerably greater detail on the origin of the books:

Many years ago, with Terri Windling as my editor, I penned two novels spun from the Irish Táin Bó Cúailnge – the epic fantasy tales of the demigod Setanta, better known as Cú Chulainn. The project became something of an obsession… It was picked up in the late 1990s in a small-press edition that put both novels into one volume called Crimson Spear, and in that form Time-Warner’s early (and ultimately premature) venture into ebook publishing put it out.

Both of those combined editions had a plethora of typos and other minor issues. So I’m delighted to have the rights back to these books. And as of today, the first one, Táin, is again available in ebook format for Nook and Kindle exclusively through Book View Cafe. The sequel, Remscela, will be out in early December, also exclusively from Book View Cafe.

Let us know what you think!