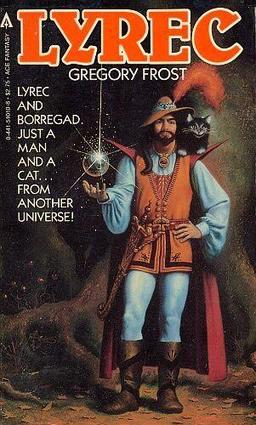 Gregory Frost is the author of the popular Shadowbridge novels (Shadowbridge and Lord Tophet) and the World Fantasy Award nominee Fitcher’s Brides, among others.

But I admit the the novel I still give to friends to introduce them to Frost is his debut Lyrec, a fantasy romp about a long-lived space traveler, his talking cat Borregad, and the evil menace they’ve tracked across countless star systems, the ruthless Miradomon. Lyrec was published as a paperback original by Ace in 1984, and went through multiple reprintings. This one was on a lot of reading lists in the 80s.

Lovelorn Lyrec and wise-cracking Borregad have been companions through world after world, adventure after adventure. They seek Lyrec’s lost lady, and vengeance for the obliteration of their homeworld. But the evil Miradomon is always one step ahead, leaving a dark trail of destruction behind him.

Crossing a chain of parallel universes, our heroes must take on new identities in each new world. In his latest incarnation, Lyrec has done quite well for himself. He is young, strong, handsome, skilled in the arts of war and song. Poor Borregad blew it. He’s stuck in the body of a cat. And Miradomon?

One of my few moments of Putting Things Right was finding a copy of Lyrec in a used bookstore, with a signed dedication from Mr. Frost to Lin Carter, which I came upon not long after Mr. Carter’s death. (At the time of his death, Mr. Carter was living in my hometown.) At my first Worldcon (1998, Bucconeer in Baltimore), I brought the book with me, found Mr. Frost, and returned it to him. He said that he was unsure if it ever reached Mr. Carter, being a copy he sent off in honor of a mentor whom he had never met. I told him about the bookstore and Mr. Carter’s final home and my guess that the book had been in his library, then disbursed with the rest of the estate. Part of me wanted to keep it, but it seemed better going back to its author.

That’s a fabulous story! Thanks for sharing it.

Very cool, Eugene! LYREC’s a great book.
My first encounters with Mr Frost’s writing were his two Irish fantasy novels, TAIN and REMSCELA. They comprise, IMO, the best retelling of the Ulster Cycle ever put to paper.
I contacted Mr Frost back in 2010. Very cool guy.

Excellent choices, sir. I have NOT given away my copies of Tain or Remscela!