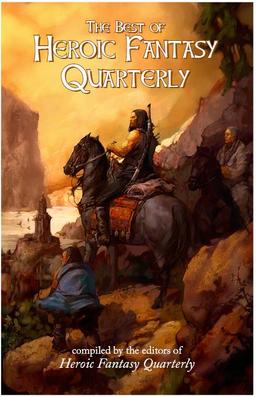 It is hard to believe that David Farney and I started Heroic Fantasy Quarterly in the waning half of 2009. Six years ago; and internet years are like dog years so that’s, well, that’s a long time.

It’s also hard to believe that we’ve been talking about this best-of idea since 2013! We finally did it, though, and made hard choices from our first eight issues to bring out the best work, summoned the incredible skills of artist Justin Sweet, and even brought Black Gate‘s own John O’Neill in on it.

And now it is a real thing, available for pre-order and going live/shipping on Black Friday.

Our table of contents:

Introduction: “Over the Hills and Far Away…and Hiding Right Next to You” by John O’Neill

There should be more anthologies to come, and of course HFQ itself isn’t going anywhere!

Will there be a print edition available as well?

Very cool. Any new S&S anthology’s a good thing, but from the terrific folks at HFQ it’s downright exciting.

Dr. Fated, we intend to have it available as both an ebook and hardcopy (POD).

Fletcher Vrendenburgh: We try our best!

Aha! So this is the good news David Sklar has been vaguebooking about! He’s been my main critique partner for the better part of a decade, and we coedited an anthology together. You can trust David to be awesome.