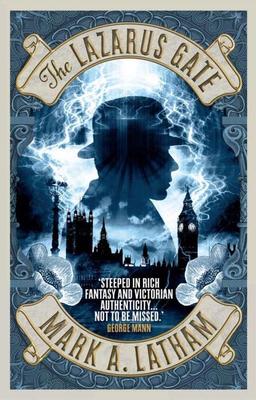 Mark Latham has had an interesting career. He’s the former editor of White Dwarf, Games Workshop’s flagship magazine, and the head of their ultra-successful Warhammer 40K line. He’s also a game designer is his own right, with several tabletop games to his credit.

His debut novel, The Lazarus Gate, is the opening volume in a new Victorian supernatural series. Captain John Hardwick, a tough but troubled army veteran, is recruited by a mysterious club to combat a growing threat to the British Empire. It’s an intriguing new gaslight fantasy, reminiscent of James Blaylock and Arthur Conan Doyle.

London, 1890. Captain John Hardwick, an embittered army veteran and opium addict, is released from captivity in Burma and returns home, only to be recruited by a mysterious gentlemen’s club to combat a supernatural threat to the British Empire.

This is the tale of a secret war between parallel universes, between reality and the supernatural; a war waged relentlessly by an elite group of agents; unsung heroes, whose efforts can never be acknowledged, but by whose sacrifice we are all kept safe.