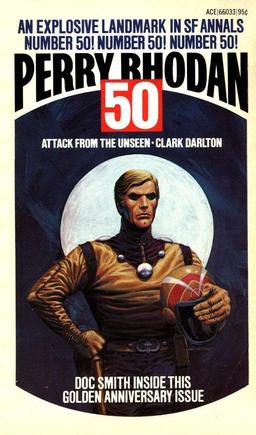 Back when I was a teenager in the 1970’s, I was a big fan of the Perry Rhodan series.

The English edition was published by Ace Books, and edited by Forry Ackerman. Forry offered subscriptions to the series, and I started subscribing as soon as I found out about the series.

The primary cover artist for the first 100+ issues was Gray Morrow. Morrow’s cover for #50, “Attack From the Unseen,” showed Perry posing heroically.

Fast forward 28 years to the 62nd Worldcon, Noreascon 4, held in Boston. Prior to the convention, Deb and I visited our friend, Jerry Weist, and his wife Dana, who lived in the area. While going through stacks of art in Jerry’s flat files, I was astounded to find the original Gray Morrow painting for Perry Rhodan 50!

He told me that he’d acquired it from Forry Ackerman on one of his visits to Forry’s Ackermansion. Jerry loved fanzine art, and after some frenzied negotiating, I traded him the original cover art for the 50th (and final) issue of Forry’s Voice of the Imagi-Nation — or VOM, as it was often referred to, the fanzine Forry published with his friend Morojo for 50 issues from 1939 to 1947 — as well as a wad of cash, for the cover for Perry Rhodan 50. 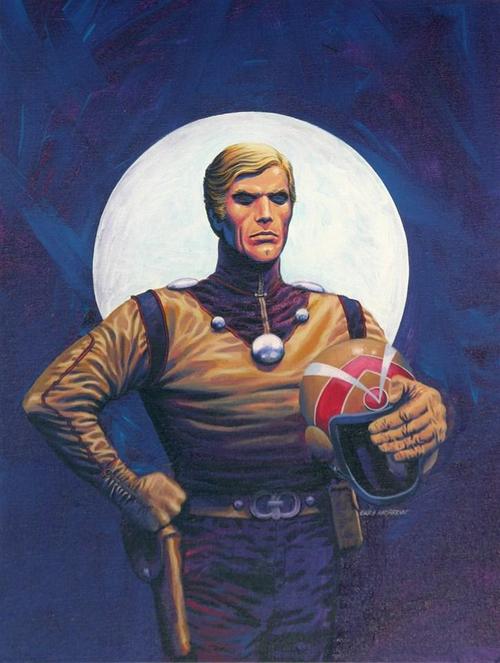 I’ve acquired a number of other Morrow pieces over the years (including a few years later, the cover for Perry Rhodan 100, also from Jerry, who’d gotten it from Forry), but this one — for me — is the pinnacle.

I entered the same contest years ago and no poster. Morrow’s artwork is sensational and I am trying to track down some prints, especially of the Perry Rhodan covers which I think are the best sci fi paintings ever. Don’t get me wrong, Chris Foss is awesome, but Morrow resonated with me. Where can one get some of these Morrow prints? Do they exist?

So tell me – are they worth reading? I’ve always wondered.

I liked them as a kid. I’ve read them again from time to time and they are like nostalgic old sci fi. There were many innovative ideas they had like the microbots which were small insect like drones that could creep into had to get places. They seemed like the fore runners of nanobots and drone technology. There were other interesting things that are now no longer science fiction. Some stories are very dated post WW2 stuff. I think I liked that it wasn’t so much about Perry Rhodan who was a peaceful regent but about the surrounding cast of characters that were a lot of fun too. If you get a chance read about the break away colony which starts in episode 49. Try one or two and you can make up your mind if the series is worth your time.

Perry Rhodan essentially introduced me to SF, when I was 12 years old. I found it fabulous.

I haven’t revisted it in four decades. Even at the time, I found certain series writers to be very clunky, and others thrilling. As Ape says, for us, it’s heavily tinged with nostalgia. I can’t say whether there’s anything in it for an adult reader today, but who knows? If you have a fondness for pulp serial SF, and a high tolerance for the occasional clunker, you might enjoy it.