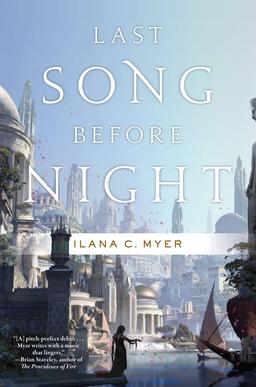 I was totally drawn in to Last Song Before Night… the story is as grand as a Wagner opera.

It’s one of the most impressive debut novels I’ve ever read; I am in awe.

And in a feature review, NPR said:

Myers’ depiction of Tamryllin and the land it inhabits is shadowy and lush, a tapestry of gossamer wonders as well as theocratic oppression and brutality. But the core of Last Song‘s strength is its characters. Bound by enmities, rivalries, lust, sacrifices, and ancient tragedies, the novel’s sizeable cast forms a dizzying chemistry… Last Song Before Night is about music, but it’s also a work of music itself: Lyrical, dynamic, and winningly melodic.

See our previous article about the book here.