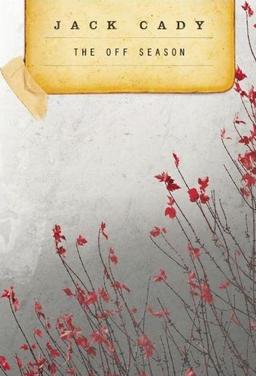 I have not read all of Jack Cady’s novels (one is socked away in a cache of books meant for a time when I can enjoy more leisure reading), but I’ve read most of them and The Off Season is my favorite.

One reason is because I edited the book and twenty years later, I have only good memories of the experience. Perhaps the file for the book, somewhere in the basement of the Flatiron building in Manhattan, is full of contentious correspondence, but if so, those memories are buried deeper than that basement. I don’t remember any difficult negotiations, no spats over editing the book or the cover design. The Off Season was not a book that made anybody rich, but the experience of publishing it was one of many small joys.

(I do, by the way, remember a wonderfully cranky letter Jack sent me concerning copyediting. He said something to the effect of, “I’ve gone on the record of saying how much I hate the city of Chicago. Hate the weather, hate the architecture. When I was driving, I’d go miles out of my way to avoid that city. But my feelings for Chicago pale in comparison with my hatred for The Chicago Manual of Style.” I’m pretty sure, however, that Jack sent me that letter in regard to another work.)

There are other reasons why The Off Season is my favorite, but first, let me tell you a bit about Jack.

When I first met him in the early 1990s, Jack Cady was in his early 60s, a tall man with a craggy face and a full head of dark hair (gray around the edges) and a beard he would stroke enthusiastically — not as urbane intellectuals in movies do, but more like a little kid playing with a toy.

I happened to see the 1948 film Brute Force recently and it occurred to me that Charles Bickford (Gallagher in the movie) would have made a good choice to play Jack on the big screen. Aside from the physical resemblance – both of them big guys with bushy hair and gruff voices who were clearly not afraid of physical labor – Bickford could have captured the sincerity, wisdom, and generosity of spirit that Jack exuded.

Jack worked a lot of blue-collar jobs: truck driver, tree high-climber, auctioneer. I think he met his friend Frank Herbert (author of Dune) when he was doing landscaping work on the Herberts’ property in Port Townsend. Jack’s appreciation of laborers shows in most of his fiction; Steinbeck’s influence on Cady is strong.

Jack wound up teaching at the university level, including thirteen years at Pacific Lutheran. He told me that early in his career, a student asked him: “Do you think I can make it as a writer?”

As Jack told me, “The guy was writing the most godawful stuff — cutesy and clever and just bad. But I said to him, ‘Sure, why not?’ and damned if he hasn’t gone on to have himself a respectable career.”

I did mention Jack’s generosity of spirit, didn’t I?

In the summer of 1997, Jack hosted me and my wife as we took off a week after a convention in Seattle. As I recall, Jack and his dog Molly had just returned from a trip to a jazz festival in Montana, but he made us feel welcome right away.

His house in Port Townsend was full of good, solid wood furniture and the kitchen bookshelves overflowed with fiction rescued from thrift stores. (I particularly remember seeing Hervey Allen’s work there. Was he reading Anthony Adverse at the time? I think so.) There was no television in the house that I saw.

Part of my reason for visiting Jack was because I wanted to visit Port Townsend – which brings me to another reason why The Off Season is a favorite of mine. I’m not giving away much when I say that the town where Jack lived for thirty years served as the model for Point Vestal; I found the information online after eighteen seconds of searching.1 Jack was not one to let the sins of the past go unremembered and Port Townsend had plenty of such for the remembering.

While we were in town, Jack took us to the old jailhouse that has been converted to a museum and I spent a few minutes in a cell. Jack took us to the fort. Did he show us staircase like the one in the novel? Memory fails me. I know he pointed out some mansions as we drove, but I can’t remember if he indicated that any of them modeled for the Starling House or the Parsonage.

I do know for certain that we saw none of the strange doings that you’ll encounter in The Off Season. Fiction did not become fact.

But I did get a feeling that Jack captured some of the town’s essence in his novel. Look on the pages — in between the words — and you’ll find the spirit of the place.

No one acquainted with Jack Cady’s fiction should be surprised to know that his works are grounded in their settings, rooted to the land. Like the American writers he surveyed in his book on the subject, he was aware of the history, the traditions, and the terrain of his stories’ locales. When he wrote about the homeless in Seattle, he knew the streets in question. When he wrote about the North Carolina wilderness in Inagehi or the highways of the United States in Singleton, the reality of the locales are there — they get under your fingernails, they lodge in your head.

I love The Off Season because there are spirits in the Pacific air of Port Townsend and they mixed perfectly with the magic in Jack Cady’s fiction. This novel blends the past and the present, the darkness and the light, the weight of our sins and the joy of being alive, and damn if it doesn’t get that blend just right.

And I didn’t even mention the cats.

1 If you’re curious, search for the Publishers Weekly review for The Off Season or the Peninsula Daily News obituary for Jack. I’m not going to include links, just so you can see if it takes you less than eighteen seconds.

Gordon Van Gelder is the publisher of The Magazine of Fantasy & Science Fiction. A slightly different version of this article appears in a new edition of The Off Season, published by Resurrection House. Copyright (c) 2015 by Gordon Van Gelder.