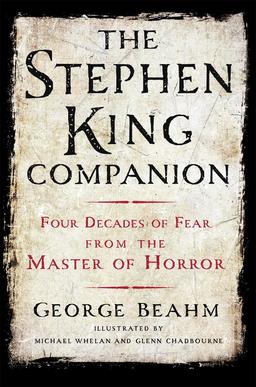 I believe I’ve read more novels by Stephen King than by any other writer. King has done more to promote and publicize the horror genre — and, by association, his fellow horror writers — than any other person in the last half-century. His books are highly collectible, and he’s produced such an enormous body of work, some of it connected in enigmatic and cool ways, that he makes a fascinating study.

No surprise then that there have been many books about King. But I think George Beahm’s massive new volume The Stephen King Companion, an authoritative look at King’s personal life and professional career, from Carrie to The Bazaar of Bad Dreams, is something special. It’s mind bogglingly complete, with lengthy chapters dedicated to each of his major works, and crammed full of photos and interesting tidbits — including a 16-page color section devoted to Micheal Whelan’s striking cover art.

But best of all, it’s extraordinarily readable, packed to the brim with all kinds of fascinating details, such as the phone call between King and Don Grant that finally got King to agree to reprint The Dark Tower: The Gunslinger, and how King saw his first photos of his father. This is the kind of book you pick up to check a quick detail, and wind up reading for hours. Highly recommended, for both dedicated fans and casual readers alike.

Supplemented with interviews with friends, colleagues, and mentors who knew King well, this book looks at his formative years in Durham, when he began writing fiction as a young teen, his college years in the turbulent sixties, his struggles with early poverty, working full-time as an English teacher while writing part-time, the long road to the publication of his first novel, Carrie, and the dozens of bestselling books and major screen adaptations that followed. For fans old and new, The Stephen King Companion is a comprehensive look at America’s best-loved bogeyman.

The Stephen King Companion: Four Decades of Fear from the Master of Horror will be published by St. Martin’s Griffin on October 6, 2015. It is 589 pages, priced at $26.99 in trade paperback, and $16.99 for the digital edition.