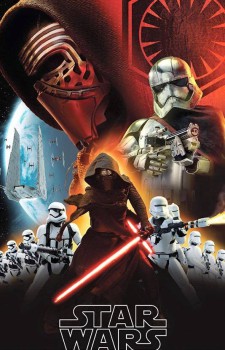 Last week’s absence threw me off my game plan of a new horror-themed post every week through Hallowe’en. I have a pretty good excuse! My wife twisted her ankle and had to go to the ER, and ever since then things have been a bit chaotic what with my better half wobbling around on crutches. Now I’m the only one who can carry all the laundry down to and up from the basement — and you know what could be lurking in the basement!

(There’s a whole blog post right there, just contemplating the fears associated with that space where our safe, comfortable above-ground homes intersect with the hidden depths of the subterranean unknown, lying there beneath the surface like the subconscious id of the house.)

And now for a somewhat labored segue: we also had a broken TV set, and since my wife has had to spend much of her time on the recliner with her leg propped up, I set off to alleviate that problem. Visits to Target, Wal-Mart, and Best Buy confirmed one thing: Star Wars has taken over retail this season almost as much as Halloween.

I swear to the Great Pumpkin, in every electronics department I heard the Star Wars theme playing. The logo is plastered everywhere; tie-in products are so ubiquitous that, were future archeologists to dig up a store preserved from September 2015, they might conclude that Darth Vader and stormtrooper masks and fuzzy wookie dolls are as much a part of this particular autumnal celebration as werewolves and jack-o-lanterns. 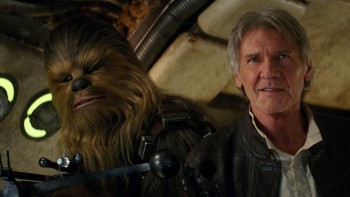 In case you missed it, the August 21/28 Fall Movie Preview edition of Entertainment Weekly featured an exclusive sneak peek of Star Wars: The Force Awakens. In a small sidebar to the main feature interview with director J.J. Abrams, reporter Anthony Breznican writes about “The Return of Han Solo.”

When it was announced that Harrison Ford would be reprising the iconic role that first made him a household name, I declared that this was a brilliant move because Han was the character — or at least the character type — most noticeably lacking in Lucas’s last batch of films. While the prequels had many — many — flaws, none was more glaring than the absence of the snarky, skeptical antihero. He served as an audience POV character, commenting with a detached smirk on all these serious Jedi and their crazy “Force” hocus pocus.

Han Solo was everybody’s favorite (and everyone wanted a Wookie sidekick). Just how integral that rogue pirate was to the first three films is painfully apparent when they’re contrasted to the prequels.

Breznican notes that “Ford has grumbled about the space smuggler over the years, even saying that he wished Solo had died at the end of the original trilogy. But the 73-year-old actor was a bit overcome” when he stepped back into the role on the first day of filming. Breznican quotes Lucasfilm president Kathleen Kennedy describing that first day, and I’ll quote her at length:

The minute Harrison and Chewie walked on board the Millennium Falcon — that was incredible. Every single person on the set was stunned. I remember turning around, and there must have been 200 people gathered behind me, completely quiet. I didn’t even know they were there. The whole crew had stopped working, staring at the monitor, because it was so iconic. . . . Harrison was going through his own experience, finding that place for himself again, to return to something that had been so much a part of his identity and acting career. It was his own little personal journey, but once he got there, it was amazing. I mean, he was Han Solo again. That’s why everybody else got so quiet! They were like, ‘Oh my God, he’s back!’”

When I read that to my wife — I’m slightly embarrassed to admit this — I got a little choked up. I had to pause and take a deep breath before I continued reading. I can imagine what that moment must have been like on set — hell, this is how it affected me just reading a few words about it! Okay, I am not that much of a geek, all right? I just, wait a sec, I’ve just got to, I got something in my eye.

There. Okay. Phew. Much better. Now, where were we? Oh yes, since this is a SEPTOBERFRIGHT post, and I have the Fall Movie Preview issue of Entertainment Weekly in front of me, I’ll give you a quick rundown of coming attractions that seem to have a supernatural horror theme, along with some of EW’s capsule descriptions and some random thoughts from yours truly…

Cooties: “Elijah Wood, Rainn Wilson, and Alison Pill are teachers at an elementary school where diseased cafeteria food turns kids into zombielike brutes, making them even more terrifying.” 9/18 Sounds like it could be fun. Don’t know anything else about this one, but the presence of Wood is reassuring — he tends to be pretty selective in his roles. — Oz

Hotel Transylvania 2: “Drac (Adam Sandler) worries that his daughter might move away with his grandson, so while she’s out of town with her in-laws, the Count and friends test the baby to see if he has the goods to be bad.” 9/25 My kids are begging me to take them to this one (we all enjoyed the first one, which I think was underrated by critics). — Oz

The Visit: 9/11 M. Night Shyamalan returns, but does he return to form? One review I’ve read says yes, he does, but I haven’t checked into any other buzz yet. Just a sec while I hop over to Rotten Tomatoes . . . Hello, I’m back. Tomatometer is at 58%, which gives it a “rotten” rating because it just barely misses the 60% consensus necessary to be ranked “fresh.” Still, nearly six out of ten critics gave it a generally positive review, and RT’s own “Critics Consensus” summary says this: “The Visit provides horror fans with a satisfying blend of thrills and laughs — and also signals a welcome return to form for writer-director M. Night Shyamalan.” Okay then. — Oz

Goosebumps: 10/16 A screen adaptation of the popular Scholastic books series (before the boy wizard with the scarred forehead came along, they were like the bestselling children’s books ever), it looks like they’re taking a meta approach with this one a la Wes Craven’s New Nightmare (but for kids): Jack Black actually plays author R.L. Stine, who discovers that all of the creatures he made up in his books are coming to life. Another one my kids are clamoring to see. (Can you tell they’re my kids?) — Oz

The Final Girls: “Max (Taissa Farmiga) is able to see her dead mother again when she’s transported into the campy ‘80s horror movie that her mom starred in before she passed. An emotional reunion, a crazed killer, and raging hormones ensue.” 10/9 Does it make me weird that this two-line synopsis really makes me want to see this film? — Oz

Knock Knock: 10/9 Keanu Reeves teams up with director Eli Roth. How scary is that? — Oz

Bone Tomahawk: 10/23 Dubbed a western, but features cannibals. And hey, nice to see Kurt Russell back in action! — Oz

Paranormal Activity: The Ghost Dimension: 10/23 For those keeping count, this is number 6. — Oz

Rings: 11/13 Another sequel to The Ring — I wonder if the entities have upgraded from VHS? I mean, does anyone even still have a videocassette player to be cursed by? — Oz

Alvin and the Chipmunks: The Road Chip: 12/23 Okay, I know it’s not technically a horror film, but aren’t you frightened? — Oz