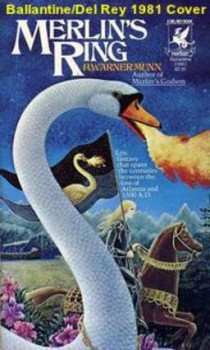 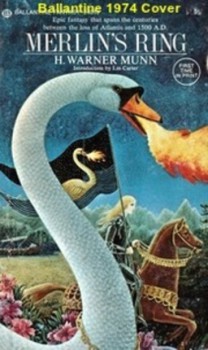 A few months ago I wrote an article about H Warner Munn’s excellent books The King at the World’s Edge and The Ship From Atlantis. Munn wrote both in the 1930’s, although the latter was only published later. By all accounts he took a hiatus from professional writing to concentrate on raising a family and providing the financial security that entails.

His passion for writing had not totally subsided, and as his “day job” career wound down, Munn embarked upon what many consider to be his magnum opus: Merlin’s Ring. Please note that this article does contain a few spoilers, which are necessary to explain certain concepts.

The volume sat on my shelf for years, like so many under the “one day I’ll read it” tag, but having undertaken the previous two books in what is now considered the Merlin’s Godson Cycle, I felt obliged to start Merlin’s Ring.

Merlin’s Ring continues the tail of Gwalchmai, whom we last encountered in The Ship From Atlantis. The book was published by Ballantine in 1974 with a cover by Gervasio Gallardo. It appears to have been republished a few times under the same imprint and later by Del Rey, with the same cover, until 1981. (Click on the images at left and right for more detailed versions.)

I found Gallardo’s cover to be attractive and, more importantly, it speaks to the content of the book, which I personally find preferable. More recently Cold Spring Press republished Merlin’s Ring with new cover art (see below). I have been unable to discover much more about the publisher or the quantity of volumes they produced. Suffice to say, I have yet to encounter a volume on eBay.

The beginning of the story takes a little jump from where The Ship From Atlantis ended, and starts with a small fishing boat of Vikings who discover Gwalchmai entombed in an Icelandic glacier. Now Gwalchmai had previously consumed a potion known as the Elixir of Life, gifted to him by Merlin, and so it was that upon being found in the glacier, he was not a corpse, but rather in a form of suspended animation.

Soon the reader encounters Corenice, the Atlantean girl whom he discovered and fell in love with in The Ship from Atlantis. Their eternal love, and each’s own way of defeating death, becomes one of the core themes of the book. Gwalchmai is figuratively immortal, or more literally extremely long lived, while Corenice’s unbound spirit, initially preserved in a metal body through lost Atlantean technology, was able to find lodgings in various receptacles when that vessel finally expired, while she looks for an opportunity to reunite with Gwalchmai. 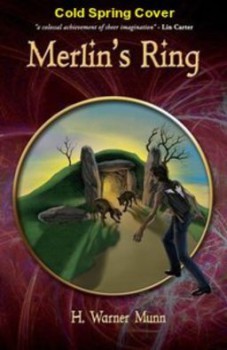 I found the beginning a little disjointed as there was no explanation as to how Gwalchmai came to be entombed in the glacier. Could it be The Ship From Atlantis was abridged to fit the Ace Double format? Once past my initial discomfort I was soon drawn into the epic, which this book truly is.

Munn, through either clever pre-work decades before, or perhaps by cleverly re-using small plot elements from the previous stories, is able to bind Gwalchmai with a gaes that causes him to undertake a series of adventures over centuries in order to complete his undertaking. What this allows is a series of adventures in different times and settings, working in elements of history, myths and legends.

The book has been meticulously researched so as to blend plausibly with reality — from a folklore tale from Wales, locating the sword of the famed paladin Roland, to a search for Prestor John and the Mongol invasion of Nihon and how a Tsunami (divine wave) saved that noble nation from being overrun by Kublai Khan’s hordes. 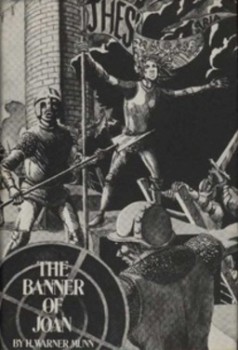 Gwalchmai travels the earth searching for a way to discharge his gaes. Visiting the land of Fairie, encountering Vikings, Ancient Atlanteans and other people, he progresses across Europe to the furthest reaches of Asia and back again. He is not conscious all of this time, as the nature of his immortality is such that he is forced into an occasional death-like slumber spanning decades, before waking to undertake the next stage of his gaes. All this time Corenice is inadvertently left behind, tasked with watching and waiting until they can once again be united.

Towards the end of the novel, Gwalchmai encounters Joan of Arc and becomes one of her trusted lieutenants. Supplementary reading and research of H Warner Munn’s works indicate that he was quite a fan of Joan of Arc. He wrote an epic poem called “The Banner of Joan,”  which is said by some to have come about as a result of his efforts on Merlin’s Ring.

One theme that does come through quite strongly in Merlin’s Ring, and which also saw mention in the previous two stories collected in Merlin’s Godson, is the fact that Merlin converted to Christianity. This is no simple side tale, but rather a driving force of the gaes and the subsequent plot, and which causes Gwalchmai to make certain decisions. Whether H Warner Munn was deeply religious and felt it necessary to imbue the story with Christian elements, or whether it is a necessary plot device, I am not able to comment on. Suffice to say that it works, and even adds to the stories believability.

So in terms of this work being an epic, I say it definitely fits the bill. It is well researched, covers an expanse of geography and history, and cleverly binds the plot together into a cohesive whole that had me rooting for Gwalchmai while in turn feeling his pain and desperation at low points. I believe it could be read without necessarily reading its predecessors, as the author explains previous events sufficiently where necessary — without working up a pay-per-word verbosity– but why could one wish to deprive oneself! One of the comments on my previous post stated that the reader found the novel to be somewhat dry. Having now read it, I would encourage a re-read if willing or possible, as I found it be quite the opposite. 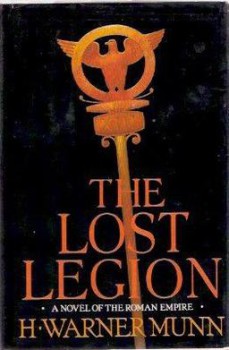 I had a lot of fun reading Merlin’s Ring. It is a product of a rich intellect with a knack for storytelling, in a tight, to-the-point manner that does not require 500+ pages. There are some areas which I did feel fell a bit short, or which I would like to have seen expanded, but they were by far in the minority.

One peculiar item I wonder on is mention of an old enemy of Merlin, Odurpa, who is set to dog Gwalchmai’s steps and prevent him from completing his quest. In one part there is mention that this enemy came to earth from space millennia ago. I found this reference a bit obtuse. Not sure if this is a reference back to The Ship from Atlantis and a bit I simply forgot, or was excised to conform with the Ace Double format, or perhaps is a obscure reference to the Sumerian Texts or even of perhaps a Biblical or Babylonian significance? Perhaps it just cross ties to another Munn work I am not familiar with? I mention this not to poke holes in this sterling work, but rather to invite commentary from other knowledgeable readers who may have answers.

When I reviewed Merlin’s Godson Cycle I mentioned the misunderstandings that led me to first discover H Warner Munn. He wrote a book called The Lost Legion which is highly recommended by many.

The story is, to a certain degree, a rework of The King at the World’s Edge set in a different time and detailing the adventures of a legion under the Emperor Caligula. One small consolation for my confusion was, when I read The King at the Worlds Edge, the title of the first chapter is The Lost Legion. 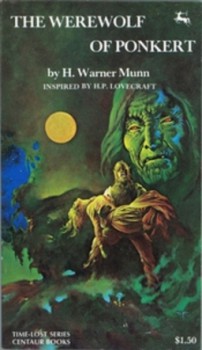 The books reviewed here and in the previous article are all reasonable obtainable through the second hand market, as are some of his other works, such as The Werewolf of Plunket and Ten Tales of the Werewolf Clan.

As far as I am aware, few,works by H Warner Munn are currently in print. (Merlin’s Ring was reprinted in 2005, and Ten Tales of the Werewolf Clan was recently reprinted by Altus Press and reviewed by Christopher Paul Carey here).

In terms of Mr Munn’s short fiction, a few stories were published by Weirdbook, for which various back issues seem to still be available. “The City of Spiders” was published in Weirdbook #1.

A slightly harder find is Robert Weinburg’s short lived Lost Fantasies series, which also published Ten Tales of the Werewolf Clan in installments in issues 4, 5 and 6. Other works included are “Abd Dhulma” by GG Pendraves, “No Eye-Witness” by Henry Whitehead and even “The Dwellers Under the Tomb” by Robert E Howard. (All in issue 4. My copy of issue 6 is still somewhere at local customs, while I debate the exorbitant duties they’ve attempted to levy on a 70’s zine.)

Thanks to the Internet Science Fiction Database and the various Munn fans who have published information on the internet, without whom I would have been unable to write this article.

Tony Den’s last article for Black Gate was A Neglected Classic from the Golden Age of Sword & Sorcery: H. Warner Munn’s Merlin Cycle. His personal website is at www.runequest.za.org

Right you are, Deuce. I’ll take the blame for that — a better editor would have caught it. 🙂

I’ve fixed it in the text, and in the title. Thanks for the catch!

Myself, I regard Merlin’s Ring as the final Ballantine Adult Fantasy volume — it has the Lin Carter introduction, and that “First Time in Print!” is in a circle that’s exactly the same size as the Unicorn’s Head logos used to be.