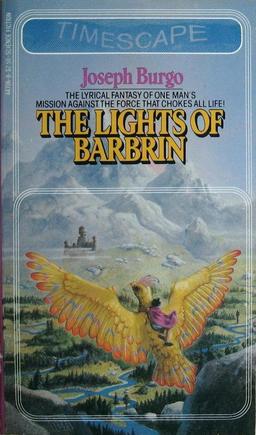 I haven’t said a lot about the Timescape imprint from Pocket Books, one of the most prestigious publishing lines of the 80s. Founded by David G. Hartwell, it was named after Gregory Benford’s SF novel Timescape, and it produced over 100 paperbacks between 1981 to 1985 — including the four volumes of Gene Wolfe’s Book of the New Sun, Philip K. Dick’s The Divine Invasion and The Transmigration of Timothy Archer, Clark Ashton Smith’s The City of the Singing Flame, John M. Ford’s The Dragon Waiting, Donald Kingsbury’s Courtship Rite, and many others — including many Hugo and Nebula award nominees. It was shut down by Pocket in 1985, as it wasn’t producing a sufficient number of bestsellers for its budget. The line has a sterling reputation for quality. And among the many high-profile books, it also produced a number of highly regarded titles from lesser known authors… including The Lights of Barbrin, the debut fantasy from an unknown writer named Joseph Burgo.

The Quest of Ehred the Mighty

Braced by the strength of his Haziad — the four freedom fighters who represent fire, air, earth, and water — fire-bearer Ehred fought his way to importance, wielding a mighty force that made him all powerful in Nabrilehr, the land of the misfits.

But the evil Rand, barred from all Haziads because of his twisted devotion to the dangerous Unmaker, strove long and hard — and finally stole Ehred’s fire power for his own destructive use.

Now Ehred and his Haziad must steal back the blazing power — for in Rand’s hand it threatens to consume Ehred’s world!

Burgo never produced another fantasy novel, and this is his only contribution to the field. The Lights of Barbrin was published in paperback by Pocket in September 1978, and reprinted under the Timescape imprint in February 1982. It is 192 pages, priced at $2.50. The cover is by Carl Lundgren. There is no digital edition, and it has now been out of print for 33 years.

I’ve got several of these Timescape books I’ve dug out of flea market bins and old book stores here and there. For some reason I was thinking they were much older than you pegged them. Correct me if I’m wrong, but weren’t a lot of them reprints of previously published stuff?

But my personal recollection is no, the TIMESCAPE line was largely original stuff.

They did do a few Clark Ashton Smith anthologies that were very nice.

Indeed! They were absolutely marvelous. They helped introduce a whole new generation to his fiction. There hasn’t been a mass market CAS collection since.

The three Timescape CAS volumes are:

They are all collector’s items today.

There’s a sad story about the sequel to my first book, THE LIGHTS OF BARBRIN. My publisher offered me a paltry advance and my agent at the time was offended and advised me to turn it down. How likely is it that another publisher would buy the sequel to a novel published by a different imprint? The worst advice I ever received. So the sequel was never published and I never finished my proposed trilogy.

Fast forward and here I am, a clinical psychologist and about to publish a new book, THE NARCISSIST YOU KNOW, to be released next month by Touchstone.

Thanks for your kind words about my book.

Thanks for the comments! Great to hear from you.

And that is a sad tale about the sequel… very sorry to hear it. Congratulations on the new book, though… I saw it listed at Amazon when I was researching this article, and assumed it was a different Joseph Burgo!

If you’d ever like to tell the story of publishing THE LIGHTS OF BARBRIN and its sequel in more detail, we’d be honored to have you do a guest post for us. The book still has fans even after all these years, and I think they’d be very interested in where the sequel would have taken them.

Because the rights to this book have reverted to me, I decided to go back and clean up the prose (oy, so overwritten!) and re-release myself as an ebook and in print-on-demand format as well. Here it is on Amazon.

Any plans to release the unpublished second book? What’s it called?