Sidgwick & Jackson released The Best of Frank Herbert in hardcover in the UK in 1975. The book was edited by Anugs Wells, with a fairly drab cover by an unknown artist (see below). It was 302 pages.

For the paperback edition the following year, Sphere split the book into two volumes, both around 160 pages. The cover artist was uncredited in both cases, but it sure looks to me like Bruce Pennington. (Click the images above for bigger versions.)

The book was never released in the US, and the UK paperbacks have now been out of print for almost 40 years. The UK editions can be a little tricky to track down in the US, but they’re fairly common in the UK. As of this writing, half dozen copies are listed on eBay, priced at $10 and up per volume.

Here’s the complete Table of Contents for The Best of Frank Herbert 1952-1964:

And here’s the complete Table of Contents for The Best of Frank Herbert 1965-1970:

Here’s the back cover text for both volumes (click for bigger versions): 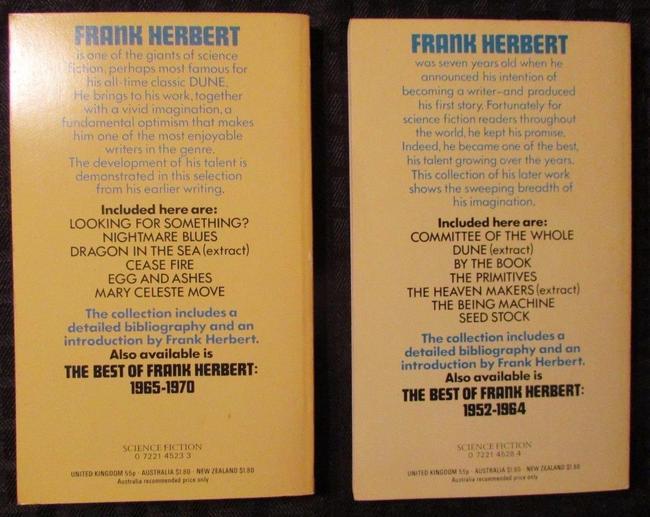 See all of our recent Vintage Treasures coverage here.