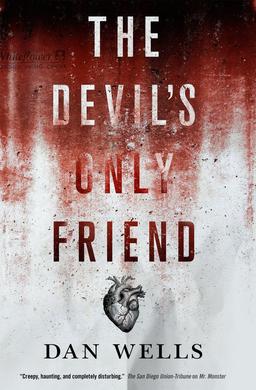 Dan Wells’ novel, I Am Not A Serial Killer, featuring monster-killing teenage sociopath John Cleaver, was the first novel in a trilogy. It was followed by Mr. Monster (2010) and I Don’t Want To Kill You (2011). Wells became a New York Times bestseller with Ruins, the third novel in his YA Partials series. Now he returns to the John Cleaver series with the first novel in a brand new trilogy, The Devil’s Only Friend.

John Wayne Cleaver hunts demons: they’ve killed his neighbors, his family, and the girl he loves, but in the end he’s always won. Now he works for a secret government kill team, using his gift to hunt and kill as many monsters as he can…

…but the monsters have noticed, and the quiet game of cat and mouse is about to erupt into a full scale supernatural war.

When John again faces evil, he’ll know what he has to do.

I’m not the only reader in my house, and I have to admit I wasn’t the one who discovered The Devil’s Only Friend. My daughter brought it home from the bookstore on Saturday, and has been glued to it ever since. Maybe I’ll get her to do a review.

I really liked this one. I’m also a huge fan of the first trilogy. Have you read them, John?

Thanks, Rachel. I have not read them, but my daughter (age 16) really likes this one.

Maybe you can answer a question for me. What makes the first three books a trilogy, and the fourth one the start of a new trilogy, instead of just the continuation of the series? Is the fourth different in some way?

Honestly, aside from the fact that the setting is different, and that a year or two has passed, I really don’t see a difference. This one really is just a continuation of John’s story. I think, and this is just me speculating, that the first 3 are referred to as the first trilogy because the author hadn’t planned on writing more than those three.