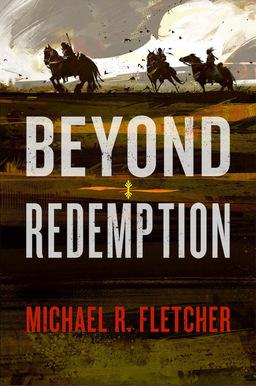 We all love to see new novels by our favorite writers. But this industry also warmly embraces new authors, especially when they bring something fresh and new. The latest hot buzz I’m hearing is for Canadian author Michael R. Fletcher, who’s just released his second novel, Beyond Redemption, the first in a gritty new series set in a world where delusion becomes reality… and the fulfillment of humanity’s desires may well prove to be its undoing.

When belief defines reality, those with the strongest convictions — the crazy, the obsessive, the delusional — have the power to shape the world. And someone is just mad enough to believe he can create a god . . .

Violent and dark, the world is filled with the Geistrekranken — men and women whose delusions manifest. Sustained by their own belief — and the beliefs of those around them — they can manipulate their surroundings. For the High Priest Konig, that means creating order out of the chaos in his city-state, leading his believers to focus on one thing: helping a young man, Morgen, ascend to become a god. A god they can control.

Trouble is, there are many who would see a god in their thrall, including the High Priest’s own doppelgangers, a Slaver no one can resist, and three slaves led by possibly the only sane man left. As these forces converge on the boy, there’s one more obstacle: time is running out. Because as the delusions become more powerful, the also become harder to control. The fate of the Geistrekranken is to inevitably find oneself in the Afterdeath. The question, then, is:

Who will rule there?

According to Fletcher’s bio, the next two novels in the Manifest Delusions series, The All Consuming and The Mirror’s Truth, are already complete, and are currently being edited for release.

Such a great book – it just *slightly* edged out The Grace of Kings for my favorite read of the year so far. Well worth a read for anyone looking for something different that actually delivers on the promise of its madness.

Thanks, Beauty! And The Grace of Kings is another hot property this year.

Just finished the last week. Wonderfully dark and weird.
I’m very curious as to what’s up with the German sounding names.

Thanks, Kid. “Wonderfully dark and weird” is a strong endorsement in my book!

This one knocked me onto my keister (to use a sort-of Germanic word). I have a friend who runs Unknown Armies, a game in which magic use leads to madness. I have given him this work, in which madness leads to magic, to see what he has to say. Particularly as he is a psychologist and Fletcher’s delusions are straight out of the Diagnostic and Statistical Manual (DSM), the “bible” of mental health field.