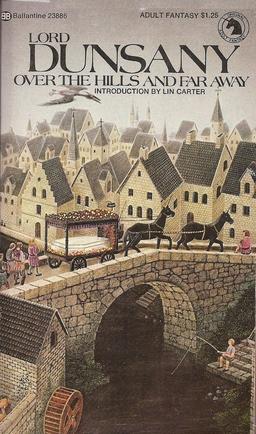 Over the Hills and Far Away is my favorite Dunsany collection, and the Ballantine Adult Fantasy edition, edited by Lin Carter and published in 1974, is my favorite edition.

Yes, some of that has to do with the gorgeous wraparound cover by Gervasio Gallardo (see the original painting here). But I think most of it has to do with Lin Carter’s attitude as an unabashed Dunsany fanbody, and the passion that comes across throughout the book. This is a man who was arguably the most respected voice in fantasy in the mid-Twentieth Century, and his admiration for Dunsay was second to none. Here’s a bit from his introduction:

Lord Dunsany is probably the greatest fantasy writer who ever lived. Quite a few of the most distinguished writers of fantasy have made a similar judgment of his work. James Branch Cabell, for example, praised Dunsany’s craftsmanship in glowing terms. H.P. Lovecraft adored Dunsany’s early Book of Wonder tales, and paid them the highest compliment of direct imitation (as I also have done in my little fables of Simrana the Dreamworld). In fact, Lovecraft wrote several pieces about Dunsany’s work, which he considered superlative. I think Clark Ashton Smith might also have concurred with my estimate of Dunsany, and perhaps Jack Vance and Fritz Leiber would agree as well…

In the pages of this book I have brought together twenty-five of his finest fantasy stories, as well as one major novella, or short novel. Also included are two of his most brilliant and fantastical plays, four of his short-short stories, and (just to give you a balanced and comprehensive view of his entire literary career) four of the later short stories concerning Mr. Joseph Jorkens, the world traveler and noted clubman.

Over the Hills and Far Away was edited by Lin Carter and published by Ballantine Books in 1974. It is 234 pages, priced at $1.25. The cover is by Gervasio Gallardo. It is part of the groundbreaking Ballantine Adult Fantasy series, which Keith West is current examining for us in detail; his most recent article was Dragons, Elves, and Heroes.

This is my favourite of the Ballantine collections of Dunsany, as well but for different reasons. Yes, the cover is stunning and the selection is superb but, for me, it is how it was acquired. In the 70s, as a teenager in Leicestershire, the choice of books to purchase was quite limited. I found a mail order firm that could supply the titles I was interested in. My memories of the local book stores are enormous displays of the Angelique series and T. Lobsang Rampa. Science Fiction was in limited supply. Fantasy not available. But I had read a review of The Wood Beyond the World by William Morris, in The Guardian newspaper. My mail order firm could supply, so I duly purchased a copy. The Ballantine Fantasy series was published in the UK with Pan books. Only a limited selection of the list probably about a quarter, was actually produced. I collected the lot and, alas, got rid of some it. The limitations on what was published was due to a combination of copyright and what publishers perceived would sell, I guess. Dunsany may have been an Irish writer but he was very much part of the English establishment – Eton and Sandhurst educated and entitled to a seat in the House of Lords. Yet, the only editions of his stories available were those in the American Ballantine series. Except, their partners, Pan, gave up on the series. When I moved to London, as a student, I discovered Compendium Bookshop in Camden Town which stocked loads of literature and poetry that I was interested in. They had a brilliant fantasy and science fiction section and imported stuff from the US. I purchased both this volume and The Charwoman’s Shadow. I would have purchased other US only Ballantine books as well – but I was a student studying English Literature, getting rather serious in my reading choices and had limited funds. Yet I still remember that thrill – a Dunsany I did not know existed; a Dunsany edition in a series that I thought I had collected all; I can afford it! Oh, is there more? Where do I stop? Neil

Mail order sources prior to the online era seem deserving of recognition. Australians, was Cockcroft a source for you?

My favorite Dunsany story is “The Fortress Unvanquishable, Save for Sacnoth,” which is in At the Edge of the World (Ballantine). I discovered it as a teenager; it was the first non-Tolkien, pre-Tolkien adult fantasy I’d encountered. The best of his stories have this indescribable texture of richness and grandeur and dread. I just remember thinking, I never knew things like this existed! After that I bought all the used BAF paperbacks I could find.

I think this was one of my later acquisitions, but yeah, it’s a great collection.

I’m sure I first became aware of Dunsany via a story in a Carter collection, but I think this was the first full-on Dunsany volume I bought for myself:

Which had a nice cross-section of his fiction and (more importantly) a bunch of the Sime illustrations.

> Yet I still remember that thrill – a Dunsany I did not know existed; a Dunsany edition in a series that I thought I had
> collected all; I can afford it! Oh, is there more? Where do I stop?

That’s a great story! There’s nothing quite like discovering there’s more to a beloved series. All collectors have experienced it.

And I well remember the thrill of ordering books through the mail when I lived in Ottawa, Canada. Quite the leap of faith, putting money in an envelope and mailing it off, to get a book you’ve never seen before from a dealer you’re barely heard of. But, oh, the joy when that package arrived….

> The best of his stories have this indescribable texture of richness and grandeur and dread.

How marvelously well put. I may have to quote you!

Major Wooton – the mail order source was J Barnicoat and they operated out of Cornwall. But they were not specialist. They just supplied paperbacks. If I wanted something mainstream, they could/would supply it. They only supplied paperbacks published in the UK. I would order some books and they would return with both books and lots of publicity material for other books. The thrill of purchasing Over the Hills and Far Away was that it was not generally available in the UK. Neil

Wow, that Gervasio Gallardo cover (particularly the full painting) is what Magritte would have painted were he a book illustrator. I buy BAF editions for their cover art and, lucky me, I stumble upon some amazing stories. Seeing Betty Ballantine at World Fantasy Con 2007 was an act of pilgrimage for me.

Dunsany is one of my favorite authors. The Horde of the Gibbelins is my favorite story of his.

Eugene R. — I also by BAF editions for their cover art. I’m very fond of Gallardo’s cover for Xiccarph, which reminds me of Hieronymous Bosch. So does Robert LoGrippo’s cover for The Night Land. Maybe the Ballantine artists had a thing for surrealists and proto-surrealists?

When I was 13 or so, too young to appreciate the opportunity, I babysat for a family that had several volumes of the Ballantine Adult Fantasy series. It may even have been a complete collection — every volume Keith West has reviewed has looked familiar from that household. I had free run of the bookshelves and borrowing privileges as long as I asked first. My usual babysitting gig was on the parents’ date nights, late enough for the kids to be in bed so that I had many quiet reading hours. I sampled bits of the BAF books, and read at least the cover copy and a bit of the intros for nearly the ones my hosts had. Alas, at 13, I bounced right off the surface of most of those prose styles. My first attempt to read The Worm Ourobouros was the point at which I gave up on Lin Carter.

I was, however, ready for a first reading of Dune and its sequels, and for Bored of the Rings. The family had named their dog after the gibberish the hobbits speak in the psychedelic Tom Bombadil scene. And isn’t Argle Bargle Morble Whoosh the perfect name for a big shaggy dog? I have many happy memories of reading the Silmarillion with Argle Bargle sprawling across my lap.

Neil H, thanks for your further comments on mail ordering. Around the same time you were getting Pan/Ballantine books from your Cornwall supplier, I discovered that Americans could order British books from suppliers such as Parker, Blackwell, etc. In this way I acquired Mervyn Peake: Writings and Drawings, The Autobiography of Arthur Machen (Far-off Things and Things Near and Far in one volume), the Everyman paperback of The Mabinogion, the Narrative Poems of C. S. Lewis, etc.

This was a timely discovery. At about the same time, I’d begun to look at the Times Literary Supplement at the university library, and every so often it featured Peake and other authors of interest.

As long as I’m mentioning mail order, and since this is primarily a discussion of Lord Dunsany, I’ll mention that (for Americans, anyway) T-K Graphics was a good source for new Ballantine releases; I received my copy of Over the Hills and Far Away from them. Does anyone else remember that outfit? Later I began to order from the F & SF Book Company, which had been around longer than T-K, I believe.

Sarah,
Also, “The high king at Ribroast*” – Footnote: “Either Arglebargle IV or somebody else.” A friend and I have oft used “What can’t we just do THAT?” “Alas.” “What?” “Alas.” “Alackaday, added Orlon.” “Oh.”
Is it good or bad that I can quote Bored of the Rings more easily than LotR?

This is part of Lin Carter’s legacy, a big part.

He saved a lot of greats from pure obscurity, possibly even being forgotten as the pulps, slicks and earlier “Penny Dreadfuls” crumbled. This is where CopyWrong law is dangerous to human history – today’s mediocre, unpopular, ‘more of the same’ media for entertainment might be popular much later – but for a quite a while it will be un-marketable, left to the fans and fringes and obsessive collectors. Thus if some fan digs it up and puts it on a website he could be sued by some ‘lawyer’ (copyWrong Troll) – yet if he tries to get the rights he’ll search for years and then face either a family “Ashamed of how weird Uncle Eddy wasted his life – even if it did put food on the table during the depression” or more likely some CopyWrong holder… Either would scream for “Millions and Millions” as if they were talking to Lucas or Cameron.

Lin Carter was both a fan and researcher of that era and running Ballantine he dug up the rights, negotiated and paid for them, and published left and right all this good stuff that would have been forgotten. Oh, without him REH and HPL we’d still know about probably. But Dunsany, Clark Ashton Smith, many others would be forgotten. And he was pushing against the grain, without him the later modern “PC” sludge slime machine would have wiped out science fiction and fantasy I think. I am quite sure without Carter’s push for his love of this medium there would not have been enough water to swim in for the likes of Moorcock.

There was a great cost to it. His publishing ended up putting himself out of business. And because he was only a good writer (also a genius editor) his own works were seen as derivative compared to the ultra writers he wanted to not be forgotten.