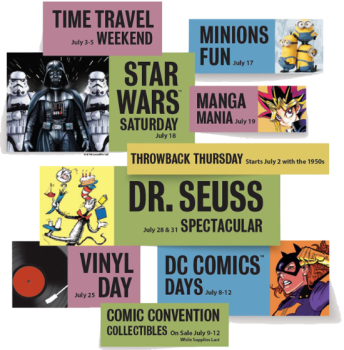 Barnes & Noble is a pretty cool store, with the one reservation that in the ‘90s it did earn a villainous reputation for running many small, independent bookstores out of business.

Ironically, B&N has in recent years run into financial troubles of its own from a new competitor on the block: Amazon and other online outlets are making survival difficult for brick and mortar stores (bye bye Borders). Tasting a bit of its own medicine, one might say. But it would be a shame to see B&N go.

In recent years, it has diversified and expanded its offerings: the children’s book section has morphed into a whole children’s toy-store department, including Lego and Thomas the Tank Engine tables where kids can play (and then beg their parents to buy the toys at premium retail prices — I walk this gauntlet every time I bring my kids along). And they are catering to fan culture with an ever-growing game section and comic-convention collectibles from brands like Diamond Select Toys, Funko, and Titans.

Underscoring this move to cater to a hip, young “geek-culture” clientele is July’s “Get Pop-Cultured” month. Throughout the month special giveaways, contests, and even encouragement for customers to engage in “cosplay” will spotlight various popular book series and film and television franchises.

I attended the July 3 spotlight on Doctor Who during “Time Travel Weekend.” Read more for a rundown of other B&N specials this month that will appeal specifically to science-fiction and fantasy fans (and for my personal opinion on whether they’re worth a trip to the store).

JULY 8-12: DC Comics Days. “Come in for a special offer on all DC Comics graphic novels and get a free ‘Young Gotham’ comic collection and poster while supplies last. Also enjoy other giveaways and activities. Cosplay is welcomed!”

JULY 18: Star Wars Saturday. “Fans of all ages join us for exclusive products, activities, cosplay, trivia, and for a chance to win a Star Wars character standee.”

JULY 24, 7pm: Fangirl Friday. “Fangirls unite and celebrate fandom. Get introduced to the Women of Marvel, enjoy cosplay, giveaways, and much more.”

There are other tie-ins during the month with Harper Lee’s new book, James Patterson, Dr. Seuss, the new Minions movie, and vinyl records (another resurging market B&N is trying to make a mark in). The dates listed above are ones I selected as being more genre-relevant here.

I am disappointed that anything RPG-related has been overlooked. A Dungeons & Dragons Day would have been cool.

Do I recommend attending any of these? Yes. I still frequent and support what few independent bookstores still exist in my region (which I could list on one hand with fingers to spare), but I regularly go to B&N too. The prices are sometimes higher than what you can find online, but I have a B&N Membership card — the 10% member discount helps a little, along with the frequent special offers and bonus coupons that arrive via email. All that said, there is still something about walking through the aisles — making unexpected discoveries, reaching out and handling the books — that perusing the pixels of Amazon will never replicate.

And I got pretty excited about the Doctor Who Day this past Friday — mostly because of the free TARDIS keychain promised with every purchase. I bought a $4.95 BBC Brix miniature collectible figurine just to get the diecast metal keychain.

But the real winner was my son. I brought my son and daughter along (at four and six years of age, they don’t understand a lot of what is going on in the show — all the “timey wimey” stuff — but they like the monsters and watch the show patiently with their mother and me). My children posed for a picture by the TARDIS standee. Then I put a slip in the entry box for each of us for the in-store drawing that would be held at 8pm.

To bide the time until then, my kids did what they always do at B&N: my son was immediately playing on the Thomas the Train play table while my daughter flipped through Berenstain Bears books. I took time to slip into reporter’s mode and noted the turnout.

There seemed to be maybe fifteen to twenty people who’d shown up for the event. I only spotted one person who’d actually accepted B&N’s encouragement to “cosplay”: an eleven-year-old boy dressed as the eleventh doctor. (Of course I strolled over to him and said “Bowties are cooool.” He just gave me a sideways look, probably thinking, “Now there’s a poster boy for Stranger Danger.”)

There were two or three families with children, and two tattooed twenty-something “fangirls” who actually filled out the trivia challenge sheets on Doctor Who (Sample questions: “What was the name of the fourth doctor’s robot dog?” “What piece of attire worn by the third doctor was again popularized by the eleventh doctor?”). Everyone got a free poster promoting the new Doctor Who line of novels and some Doctor Who stickers.

Then the drawing was announced and my kids came scampering to wait with bated breath (honestly, their daddy was much more bated than they were). 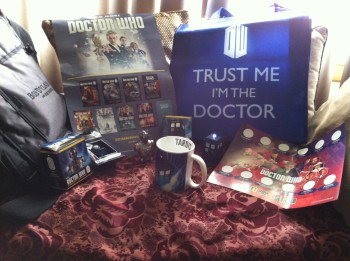 The TARDIS standee was drawn for first, and it went to someone whose name the B&N employee (a young fellow with a goatee who was wearing a bandana around his head — very hipster) had a hard time reading. “Lu Man? Luck Ann?” The winner did not materialize, so the slip was laid aside for the phone number to be called later.

Then he drew the second slip. “Landon.” My son won a Doctor Who Gift Bag!

The bag itself is emblazoned with a Doctor quote: “Trust Me, I’m the Doctor.” Inside was a TARDIS coffee mug (Cool!), a miniature bust of a Cyberman (Cooler!), and a miniature TARDIS with a working light (Way coolest!). Not a bad bag of swag — for Daddy anyway. Not much play value in there for my four-year-old, so I deftly made a trade with him after the event: a pack of cowboys and Indians, some Star Wars action figures, and a Funko plush Batman — stuff I’d recently bought at a clearance sale and not yet given to him. He was far more excited about those things, so we all came out winners (oh, and I also had some stuff I’d picked up for my daughter, so she didn’t go home empty-handed either).

We got home from our little time-travel excursion and told Mama Bear (who couldn’t go because she was busy helping a neighbor out) all about it. Papa Bear rinsed out his TARDIS mug in preparation for the next morning’s coffee. Sister began playing with her new Schleich animal figurines. And Brother went to bed clutching his new plush Batman — which, according to the box, is meant for ages 14 and up. Not because it poses any dangers to a child, so far as I can tell, but to underscore the fact that this particular little plush Batman is for Serious Collectors. How times change.

There’s a B&N pretty close to me, and I uses to spend quite a lot of time – and money – there until they cleared out an enormous space in the middle of the store, converting it into the Temple of the Nook. (The physical arrangement makes it looks like a mini-Stonehenge, I swear to God.) This take-over eliminated tens of thousands of physical books and while I have nothing against those who swear by their e-readers, I am an unreconstructed physical book man. That was pretty much it for my patronage. Neat event, though.

I remember when the B&N here became “Nookified,” but it has since been scaled way back.

I’ve never gone to an e-reader, either (although my wife would likely appreciate all the space it would free up, I prefer my shelves and shelves of books).