The self-published book review will be going on hiatus for the next few months while I start on a new project. Feel free to continue sending me submissions, but don’t expect to see many reviews posted before 2016. 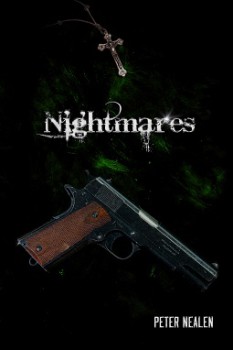 Peter Nealen’s Nightmares is this month’s self-published novel. As a marine serving in Iraq, Jed Horn had a nasty encounter with an ifrit, a creature of fire and darkness. Returning to the states, he tried to forget, but no matter how much he drank, it wasn’t enough. So he started looking into the matter, hooking up with ghost hunters and amateur occultists. That turned out to be an even worse mistake. Dabbling, with no real knowledge of what you’re up against, is a quick way to attract the attention of some very dark, very evil things. One of them is following Jed now, killing those he’s interacted with. When he meets up with a priest, Father O’Neal, and Dan, who claims to be a Hunter of the dark things, they give him an ultimatum: either join up and fight back against the things hunting him, or keep running, and probably die in short order. You can probably guess which one Jed chooses.

The hunt takes Jed back to a small college in Colorado, where he first met Professor Ashton, whose studies into the occult have unearthed something real. From a stone tablet that only the professor can read, to ancient books and artifacts imbued with a sense of wrongness, Ashton has begun to glimpse what lies beyond, and has developed a mad obsession with summoning the chthonic spirit buried beneath Powell Hill. Much of the book is about Jed’s interactions with Ashton, trying to determine whether the professor is the source of the things hunting him, or merely a tool of larger forces. There’s something Lovecraftian about the horror here, manifest in wrongness and madness and alien spirits, hidden in ancient tablets and underground vaults and art and sculpture that change when you’re not looking. But Nealen turns away from Lovecraft’s nihilistic existential horror, and filters the same imagery through the lens of Catholicism.

This is somewhat risky, as it can alienate readers who don’t share your worldview—even Protestants like me, who probably agree with about 80% of it. That said, this book isn’t as preachy as the last book I reviewed where the Catholic faith was important. And Catholicism’s rich symbolism and the role it plays in much of the lore of the supernatural provides many cultural touchstones that readers can recognize, such as the efficacy of crucifixes and Latin prayers and holy water. This can lead to a situation where these things become just another type of magic, where prayers are spells and crucifixes are magic talismans, rather than symbols of the power of faith. (See something like the Japanese anime and manga Blue Exorcist (available on Netflix) for what happens when Catholicism is treated as an exotic source of magic in much the same way the West sometimes treats Eastern religions.) On the other hand, if you focus too much on the characters’ faith itself, you become more likely to drive away readers who don’t agree with it. Peter Nealen seems to be trying to straddle the line between the two, not always successfully. Sometimes the trappings of religion seem like just another form of magic, and sometimes Jed’s faith seems like it might be an important plot point—but it never really is. When it comes right down to it, success always seems to depend more on the proper tools and courage than on real conviction. Some people will prefer it this way, others will find it disappointing.

When the book begins, Jed has hit rock bottom. Haunted by nightmares, he has taken to drinking himself to sleep in a vain attempt to chase them away. When Dan and Father O’Neal make their offer, he figures he has nowhere else to go but up, and up he goes—a little too smoothly. The lapsed Catholic and alcoholic Jed appears to return to the fold a little too easily. While he has occasional doubts about his own self-worth, he never stumbles. He never seems to be frozen in terror by the horrors he faces, he’s never really tempted by either the bottle or the seductions of the darkness, his faith never falters at a crucial moment. I wish we could have seen more of the failures, the ups and downs of a man trying to put his life back together. But ultimately, the personality of the hero is an aesthetic choice. Jed is not a man plagued by his doubts and regrets. He may have them, but they don’t stop him from doing what he needs to do, or even slow him down. There’s nothing wrong with that sort of hero; they are, in fact, central to the sword and sorcery milieu so popular here at Black Gate. Nightmares is a fun book as long as you’re expecting more a shootout—often literal—between the forces of darkness and light, rather than a deeper probing of Jed’s own struggles with them.

Nightmares is available at Amazon, Barnes and Noble, iTunes, and Smashwords.