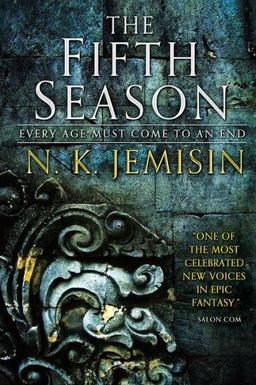 In 2010 I attended a reading at Wiscon, Madison’s premiere SF convention. One of the readers was a relative unknown named N.K. Jemisin, whose first novel, The Hundred Thousand Kingdoms, was still five months from release. There were many talented readers in the room, but the moment Jemisin began reading it became apparent that she was something very special. Her voice was sure, her prose sparkled, and the story grabbed your attention instantly. I enjoy a lot of things about this hobby, but there’s nothing else quite like stumbling upon a stellar new talent.

If you were one of the early readers of The Hundred Thousand Kingdoms, you probably have an idea how it felt to be sitting in that room in Madison. In the last five years Jemisin has been nominated for the Hugo, Nebula, Tiptree, Crawford, and Gemmell awards — she’s no longer a “new” talent, and expectations for her latest book run very high indeed. But if you still enjoy the thrill of the new, you can get in on the ground floor of a brand new fantasy series from N.K. Jemisin when Orbit releases The Fifth Season, the first volume of The Broken Earth, in early August.

This is the Way the World Ends. For the Last Time.

A season of endings has begun.

It starts with the great red rift across the heart of the world’s sole continent, spewing ash that blots out the sun.

It starts with death, with a murdered son and a missing daughter.

It starts with betrayal, and long dormant wounds rising up to fester.

This is the Stillness, a land long familiar with catastrophe, where the power of the earth is wielded as a weapon. And where there is no mercy.

I’ve been wanting to pick up Jemisin since her first book came out. This is clearly the time to do it. Thanks for the heads-up!

I read the Inheritance trilogy last fall, while taking the train from Winnipeg to Churchill, Manitoba. They were great stuff.

(Which I immediately followed by reading Sam Sykes’ Aeons’ Gate trilogy — bit of whiplash there.)

I need to read her Dreamblood books — anything set in an Egypt-based society is well worth my time — and this one as well.

> I read the Inheritance trilogy last fall, while taking the train from Winnipeg to Churchill, Manitoba.

What the heck were you doing in Manitoba??

A friend of mine tried to talk me into taking a train trip with him across western Canada after high school. He eventually took the trip himself. I don’t think anyone really understands how vast the Canadian prairie is until you’ve done something like that.

> They were great stuff.

I have not yet read the Inheritance trilogy, but it has stayed put in my to-be-read pile, while most of the titles next to it have been replaced (some many times over).

Short version of why I was in Manitoba: Mom had read about Churchill, and thought taking the train there & back might be fun. Dad had no interest in going, so I was recruited in his place. We drove up from Minneapolis (where I currently live) to Winnipeg, spent a couple days on the train, a couple days in Churchill, then reversed the process. (We had a two-person sleeping compartment, which made the trip more bearable.) Lots of time spent looking out the window and/or reading; I made it through the latest (at the time) Expanse novel, Frans Bengtsson’s Long Ships, the Inheritance trilogy, a Dunsany collection, and then started the Sam Sykes books on the way home.

Churchill was fun for a couple of days although we missed peak polar bear season and peak Northern Lights season. They have a surprisingly good public library and a really excellent diner (Gypsy’s), where we ate, I think, every meal we had while we were in town.