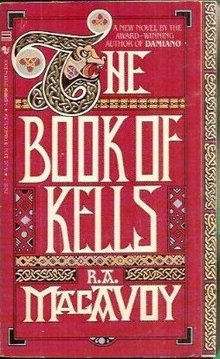 Lately I’ve been exploring portal fantasies, and last time I talked about Charles de Lint’s The Little Country. This week I’d like to take a look at R.A. MacAvoy’s The Book of Kells.

John Thornburn is a Canadian artist living and teaching in Dublin. He’s a bit of a klutz socially and emotionally, and has a tendency to focus on his work to the exclusion of everything else. His friend and sometime lover Derval O’Keane is an academic historian. The story begins when a young, injured girl suddenly appears in  John’s bathroom, having come through a portal  he inadvertently opened while working on the tracing of an old Gaelic pattern. It takes a bit of doing, but John and Derval finally figure out that Ailesh is the survivor of a Viking attack on her village in the Ireland of 985, saved by her father’s throwing her through the portal.

John and Derval take Ailesh back to her own time, and find the injured poet Labres MacCullen among the dead. John doesn’t know how to open the portal from this side, or even if it can be opened, so they accompany Ailesh and Labres to Dublin, where they hope to get help and justice from the King. Though the King in Dublin is himself a Dane at this point in history, they also want to warn him that the Vikings seem to have come as invaders, not as mere raiders who, having struck, will now go away.

Unknown to them, however, these same Vikings offered the lives of all the villagers to Odin, and the fact that Ailesh and Labres escaped puts them in a bit of a quandary. The leader decides that they must find and kill those who escaped, or forfeit their own lives – and the success of their expedition – to Odin’s displeasure. 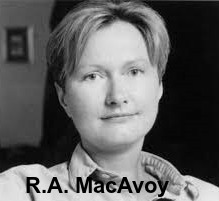 In The Book of Kells MacAvoy uses historical religious beliefs as her supernatural elements, introducing a touch of magic realism to what would otherwise be a traditional portal fantasy. There is, however, another level of realism altogether, and that’s in the characters themselves. Both John and Derval are imperfectly ordinary people, flawed not in the tragic or heroic way we normally associate with Fantasy, but in the way we normally associate with our own friends and colleagues. They engage in the adventure not out of idealism, nor even out of pragmatism, but simply because they have nothing else to do. That this seems natural and even reasonable to the readers reflects MacAvoy’s own great skill as an artist.

Derval’s flaw is common to many academics (I’m one myself, so I know), she’s arrogant about her learning, and impatient with the ignorance of others. John has the flaw of many great creative artists, he’s self-absorbed and immature, disassociated from the real world around him, particularly when struck with inspiration. Ironically, they’ve travelled to a world and time when both great artists and great scholars are highly valued. Both learn humility in totally unexpected ways.

Often, in traditional portal fantasies, the portal itself is a well-known artifact, which the protagonist is the first to use successfully. It’s also not uncommon for the portal to be found accidently, as it is here. MacAvoy’s twist on this trope is having the portal’s existence depend almost entirely on John’s artistic talent, more particularly on the fugue state that inspiration can cause in him. In this sense, it’s a portal that no one else can create. In exploring this variation on a theme, MacAvoy is also exploring the nature of art, the nature of creativity, and the nature of inspiration – unless you’re just interested in the story, in which case this is a great one.

Violette Malan is the author of the Dhulyn and Parno series of sword and sorcery adventures (now available in omnibus editions), as well as the Mirror Lands series of primary world fantasies. As VM Escalada, she is writing the upcoming Halls of Law series. Visit her website:www.violettemalan.com.

I am shamed to admit the only MacAvoy I’ve read is, yes, Tea with the Black Dragon

@ PrinceJvstin: There was a sequel to TEA, Twisting the Rope, which, though interesting, I found not as good. I would recommend both the Book of Kells, and The Grey Horse.

I can also highly recommend the Damiano books. Very very lush writing, feels like the countryside is given a voice.

Also, for more recent material, see her chapbook In Between. It was expanded out as a novel (to its detriment): Death and Resurrection, but the original chapbook was quite good.