This is Part Two of a two-part article, wherein I explore two fundamental responses a people or nation might have to the threat of war. In Part One, I talked about the “Escalation to Fight.” This time, I want to discuss averting war in the first place.

Folks who read part one will remember that I started out with the phrase, “War. What is it good for?” — a reference to Edwin Starr’s version of the song by the same name. We’ll see if the song snippet is relevant by the time I’m finished.

First, let me say, that I don’t pretend these are the only two responses to the threat of war. In fact, nations can and do engage in war as a perennial part of their industry. Or, it’s a response on religious grounds. (Thanks to those who’ve commented on Part One of this article for drawing attention to these things.) And I’m sure there are more. I’m having to be overly reductive due to spatial constraints. So, please bear with me.

So, then, if a nation or kingdom elects not to escalate to violence, another response is to try and avert war before it begins. They might engage in peace talks. They might surrender. They might try to buy their way out of the conflict. Etc. In essence, they work to find resolution to the alternative, which would eventuate in massive casualties.

To avoid the deaths of so many countrymen, a nation may prefer to be conquered. Or to cede any number of things: land, wealth. You get the idea.

And I can see how in a fantasy novel, the writer could take any of these approaches and make them work. I’m not of the opinion that it must always be an Armageddon-level battle to be interesting.

But for my latest novel, Trial of Intentions, the path to averting war takes a different tack. It’s not about interaction with the enemy to broker peace. It’s about holding the enemy in their distant home, preventing them from flooding the Eastlands — the lands of men and other races.

For context, there’s a barrier, a veil, that keeps these powerful and opposing races where they are. It was put in place by the gods. It’s kept powerful on a principle I call Resonance, which I conceived by conflating mechanical law, e.g. the acoustical principle of resonance, with quantum entanglement, e.g. two things being “stirred” simultaneously at a distance without energy having to travel between them. (Note: These ideas are bigger and more complex than my quick description here. But again, due to spatial constraints, this will have to serve.)

In Trial of Intentions, I have an entire society of science — astronomy, physics, mathematics, cosmology, etc. — organized into colleges. They study the vault of heaven, so to speak. In Trial, I also have a character — one that readers of the first book assume is something of an orphan farm boy — that has a history with this city of scientists. (So, not so farm-boyish, after all. One of many tropes I set up in The Unremembered to turn on its head.) It’s this character’s idea that perhaps instead of a “war to end all wars,” he can rush to find a way to strengthen the barrier — which is weakening — and with the help of this community of scientists, keep the would-be invaders behind this veil.

You see my point, then. In my novel, it’s not sit-ins or protests by conscientious objectors — though there’d be nothing wrong with that, if it made sense for the book. Rather, in Trial of Intentions, I’m able to introduce a key component of the over-arching series plot, while leveraging it to deepen a character. 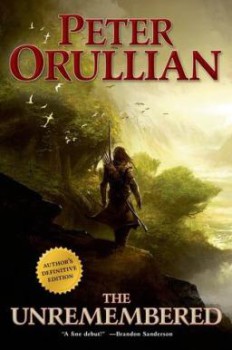 Let me explain that a bit.

This character, Tahn is his name, has a wounded past — one he’s recently remembered. He spent much of his youth in a dire place, where children whose parents no longer wanted them were sent to live with an exile. Some of these kids didn’t make it. And they didn’t make it because they fell victim to the emotional pain of being unwanted, which was then exacerbated by the waste — called The Scar — where they were being raised… many of them commit suicide. The further context is that The Scar is a result of a prior war — a land left barren by the ill-use of Resonance.

Tahn doesn’t want to see war again. And his response isn’t simple objection or anger or worry. His response is to try and marshal several scientific disciplines to find a way to prevent war before it begins. There’s debate and scientific inquiry and rigor of thought. Of course, there’s also mortal danger and battles of a very unique kind — think Resonance. But it’s all Tahn, fighting in every way he can, to keep the devastation from ever descending into the lands of men and other relatively peaceful races.

You can see the juxtaposition, then. In part one of this article, I talked about the nations of the Eastlands convening to build a great alliance of armies to meet the invasion that seems to be coming. Meanwhile, I have this other plot thread, where a main character is trying to avert war.

I found the dualities fun — escalating to war, and averting war; building better war machines (which I call gearworks), and science to stave off an invasion.

So, then, about my snippet of song, “War. What is it good for?” I think maybe for a fiction writer, it provides an impetus. Of course, yes, we can write war, and it can be immersive and compelling and sad. But it can also be the threat of war and our responses to it that provides grist for the writer’s mill.

Oh, and by the way, just so you know, Trial of Intentions begins (chapter one) with a major battle as prelude to war. And the conflict doesn’t end there in Trial, proving a nice counterpoint throughout the book to the desire to resolve conflict in other ways.

Thanks for sticking with me across this two-part article. Perhaps if John is up for it, we can talk more about conflict in the future. I’ve got some ideas about magic, the use of second-class citizens, and whatnot…

Peter Orullian has worked at Xbox for over a decade, which is good, because he’s a gamer. He’s toured internationally with various bands and been a featured vocalist at major rock and metal festivals, which is good, because he’s a musician. He’s also learned to hold his tongue, because he’s a contrarian. Peter has published several short stories, which he thinks are good. The Unremembered and Trial of Intentions are his first novels, which he hopes you will think are good. He lives in Seattle, where it rains all the damn time. He has nothing to say about that. Visit Peter at www.orullian.com, or follow him at @peterorullian.