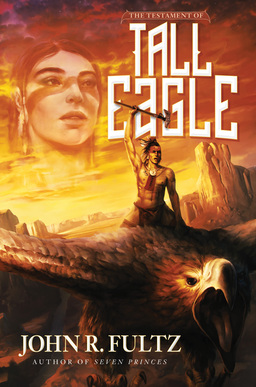 Black Gate is very pleased to offer our readers an exclusive excerpt from The Testament of Tall Eagle by John R. Fultz, the new fantasy novel from the author of the Books of the Shaper trilogy.

A second mountain sat atop the first. Yet the second mountain was made of glowing gold, beaded with shimmering crystals set in weird designs. The second mountain had been carved into slim, pointed spires like tremendous teepees of gold. Giant domes of sparkling stone gleamed brighter than Mother Moon at her fullest… All these things thrilled me and stole my heaving breath, but it was the eagles that filled my heart with joy.

Between the golden spires a flock of eagles soared. They skirted the surrounding peaks, and sometimes I heard their shrill songs tearing through the sky. Here are the Lords of All Eagles, I thought. The Eagle Spirit himself must live here. These are his people…

I had no idea how huge these eagles were until one of them descended. The light of the golden mountain made it a massive shadow winging toward me. It did not cry out, but I felt the great beating of its wings. They made a wind that nearly knocked me backwards, where I would have fallen to my death. But I knew no fear in the face of that great bird, for it served the Eagle Spirit, and had it not called me here?

John’s Books of the Shaper trilogy includes Seven Princes,Seven Kings, and Seven Sorcerers (Orbit Books). His short story collection, The Revelations of Zang, is a series of interrelated tales born in the pages of Weird Tales and Black Gate. His website is www.johnrfultz.com.

Read the complete first chapter of The Testament of Tall Eagle here.