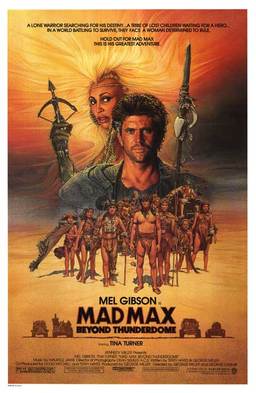 Continuing the story from my last post (Belated Movie Reviews #4: The Road Warrior), we come to the final movie of the original trilogy: Mad Max Beyond Thunderdome (MMBT).

Since this was a big Hollywood movie, the sound is good and the visuals are good — both pretty much run rings around the first two. This film, as opposed to The Road Warrior, is a bit more expansive, which is only logical, given that they can’t just repeat the conflict from the other two movies. Meaning they couldn’t simply have a mad-dog gang leader, or a siege, without looking lame (I’m looking at you, Highlander 3).

So they delved deep into shades of grey. Very, very grey. Setting up a conflict that isn’t so much two-sides-of-the-same-coin as as two jackasses out to get each other.

To the makers’ credit, MMBT really contains no “bad guys” at all. Just antagonists, opponents and opportunists. Aunty Entity says it up front — this is all really more of a family affair. Max is just a dude caught in a clash of two mighty wills, and as usual, he just wants his car back.

The movie lacks some connective tissue. Why is the gyrocaptain from Road Warrior here? Isn’t he the leader of the Great North Tribe? And while it makes sense that Max and the gyrocaptian don’t recognize each other at first (Max is all swathed against the wind and sun), it is pretty clear that the gyrocaptian does recognize him later — although he doesn’t particularly do anything. In fact, while he could barely keep his trap shut in RW, the gyrocaptain doesn’t say much of anything at all in this one.

The movie differs from the other two in that Max Rockatansky gets into fights — melee! Instead of just shooting or running over people (as effective as those techniques are, let’s not kid ourselves.) First the guards at Aunty Entities’ parlor — which goes pretty well. Then against Blaster in Thunderdome itself, which doesn’t go so well.

In fact, he does pretty poorly until he pulls the ol’ boson’s whistle trick and beats the bejeebus out of Blaster. Literally, it’s hammer time.

MMBT does continue the trend of exploring societies established in the first two movies. From a society in the process of falling apart in Mad Max, to the total chaos Road Warrior, to a re-establishment of some kind of law and order in Bartertown. AND they pull off the neat trick of adding another society — the children trapped at an oasis in the desert.

As an aside, MMBT almost wasn’t a Mad Max movie at all — the original story was that of a post-apocalyptic/Lord of the Flies society of children! The Max/Bartertown plot was added afterward. 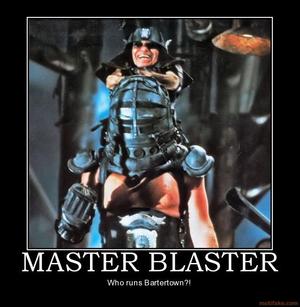 And the children’s society is fascinating, mostly due to their mythologized history — and the fact that, as a result of Max showing up, they realize there is something beyond the wasteland, and being sorta naïve, cultish and fanatical, they are gonna find it!

This leads to another point where the movie needs some more connective tissue — Max catches up with the kids when they are too far out to go back to the Oasis, so they push on to Bartertown, but then for some reason they decide that what they have to do is rescue Master from Auntie Entity’s clutches.

Which seems kind of a far stretch. It’s not like Master was a good guy, what with the extortions and the history of using Blaster to murder people in Thunderdome. Much less that the best way to do it is to steal the train engine that is the power plant of Bartertown.

So they kinda rush through that part to get to the train chase scene. The train chase scene is, I think, a pretty clever way to do it, since they couldn’t do a car/truck chase. Once they get rolling, it works pretty well. And, by the way, in stealing the train Max essentially becomes the Humungus, condemning one group to great suffering so that a second group (his preferred group of kids) can thrive!

The chase scene is a lot of fun. Interesting that in this point in the Mad Max timeline none of the cars actually look like normal cars anymore, they are all cobbled together. The train is pretty funky, too. In fact, I wonder if Bartertown began life as a wintering ground for a circus or a carnival… that would explain some of the look and feel of the place (Dr. Dealgood is basically a carnival barker, the theatrical violence of Thunderdome, “the Wheel”, the big float-head they put on Max when they send him into the desert).

It also explains a bit about Master/Blaster and maybe even Ironbar (who could have been a strong man or maybe a blockhead or something). Interestingly, Ironbar ends up doing most of the action-heavy lifting. Max, not long after the chase starts, jumps to a chase-car and takes it over. Wez made a jump from his bike to a car to the truck in Road Warrior, Ironbar goes over like four cars to get to the train, then the bit hanging off the train and eventually even being on the front of the train, and from there into the biggest car (which happens to be Max’s own from the first part of the movie). 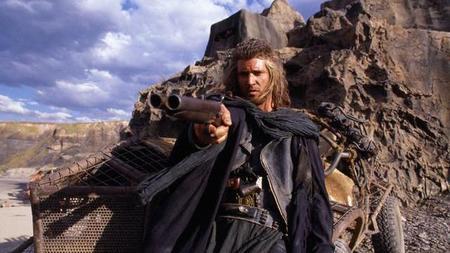 It gets a bit Bugs Bunny-ish, but it’s a lot of fun. The Gyrocaptain, being at the end of the train line, also a bit odd but because he has a plane he has a way to actually get everyone away from Aunty and her thugs, and it’s his need for a bigger runway that forces Max to drive out in front and break up the Bad Guys (smashing into his own car). In some ways this is one of the only real times that Max Rockatansky definitively picks a side.

One has to wonder why Aunty Entity lets Max go at the end. I kinda think that they have both lost what they wanted– he his car, she the power plant (or at least the guy who makes the power plant go), and no they both gotta get back to the business of fixing what they can.

MMBT keeps the feel of the first two films alive — with the weirdness, the differently abled (Master/Blaster, Bland saxophone player, Scrooloose, and the mechanic seems none-to-bright), and the continuing thread of non-Australian leaders (Auntie Entity is from the U!S!A!)

Special Fury Road Extrapolation! I’ve kept myself in the dark regarding movie #4. Not even sure where it is in the timeline; the V-8 is back, so it could be set between MM and RW. Or it could be that he fixed it after RW, but that seems a stretch. 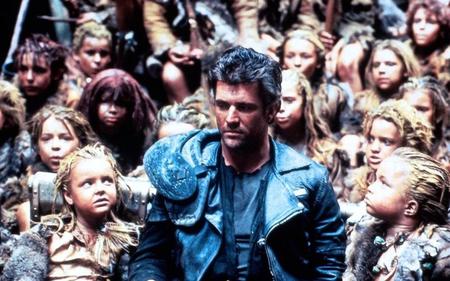 It looks to me like Immortan Joe probably has something wrong with his jaw, in fact most of the males in his camp seem to have something going on with their lips, or maybe they don’t have them. Plus there is a lot of Hannibal Lector masks going on. Looks like Max Rockatasky spends a lot of time as a prisoner. The movie seems to be about Immortan Joe trying to get his wives back, which makes wonder if he isn’t some kind of — and you may have to read this twice — pre-apocalypse leader of an apocalyptic cult who has been living large post-apocalypse. A real Jim Jones kinda guy.

I could be wrong, but I got a feeling. I also suspect that all, or most of the guys in his force are his own sons. In fact, the previews keep showing a particularly big guy… if it is set between MM and RW, could that guy be the Humunugs?

Doubtful, but maybe. Would explain all the tying people to cars in the RW. Three also seems to be something involving a submarine, maybe? In some of the previews/posters. I’m not sure what that’s about. Perhaps it is the power plant of Joe’s society, like the train was for Aunty Entity’s?

Adrian Simmons is an editor for Heroic Fantasy Quarterly. His last Belated Movie Review for us was The Road Warrior.

About the gyrocaptain, it has always been my understanding the character in Road Warrior is not the same as the character in Beyond Thunderdome, though obviously played by the same character. Not sure why I thought this, maybe an interview with Miller from long ago.

Concerning where Fury Road sits within the timeline, I’m not sure such is applicable. One review said Fury Road was not a sequel nor a prequel but a reimagining, and that’s kind of the drift I’ve been getting.

Why Miller cast such an iconic figure from The Road Warrior into a different role in Beyond Thunderdome, I couldn’t tell you. I was heartily confused for at least 10 minutes, before I figured out he wasn’t the gyrocaptain.

Okay, just watched an interview with Miller. Concerning the timeline, he said something like, “In my mind, this film (Fury Road) takes place after Thunderdome, but the timeline doesn’t quite work, does it?”

My guess is continuity wasn’t a big issue, and they just had fun making the flick.

Concerning the gyro captain, I just read an interview on gyroradar with the actor, Bruce Spence, in which he said, “They were well into the shoot (of Thunderdome) when they offered me a part described as not the Gyro Captain but kind of like the Gyro Captain. They said there’s kind of a reflection of him and that they were having difficulty casting the role so they thought to themselves, ‘Why not Bruce!'”

So in my mind, the last time the gyrocaptain had much interaction with Max he lost his snake, was chained up in the desert to die of starvation and exposure, had to carry 50+ pounds of fuel, and was shot out of the sky and damn near died. So yeah, you had your chance, partner.