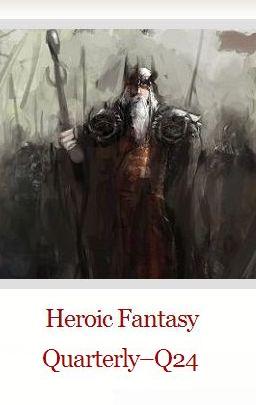 One of the most reliable magazines out there for adventure fantasy, Heroic Fantasy Quarterly, has just produced their 24th quarterly issue. This one contains short stories by Cullen Groves, Dennis Mombauer, and Andrea G. Stewart, poetry by Coleen Anderson and David Farney, striking banner art by Serbian artist Vuk Kostic, and news on their upcoming anthology, Heroic Fantasy Quarterly Volume 1.

The short stories are:

The Madness of the Mansa, by Cullen Groves
There are mysterious goings-on in the city of Asongai, which is a call to opportunity for a sea-wolf named Draba. Adventure, intrigue, vice and verse await! Cullen Groves may be familiar to readers of HFQ, cutting a skaldic swath through 2014 with his poems The Sword and The Lay of Hrethulf Glamirsbane.

Melting Gold and Ashes, by Dennis Mombauer
A world riven by war and revolution teeters at the brink of collapse and anarchy and pauses to celebrate one its few heroes.

The Reeds of Torin’s Field, by Andrea G. Stewart
Rounding out our fiction is a tale of bounty hunting, murder in the night, and worse than murder. Good stuff!

Heroic Fantasy Quarterly is an ezine dedicated to publishing short works of heroic fantasy. It is edited by Adrian Simmons, David Farney, William Ledbetter, and James Frederick William Rowe, and published four times a year in July, October, January, and April. Issues are posted to the website, and are completely free. See all the details on issue #24 here.

Thanks for boosting the signal!

Happy to, Adrian! Keep up the fabulous work!

I’m impressed with the new blood writing these stories. I’ve seen their fiction pop up in other epubs and now I read this magazine as a sampler of what’s to come.