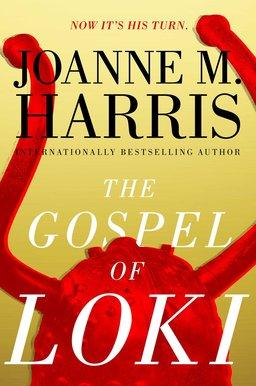 I recently had the pleasure of experiencing the only US stop of the touring exhibit Vikings at the Field Museum in Chicago. There I learned much about the Norse “tribe of gods,” which included stories about Odin, the god of war and death, but also the god of wisdom and poetry credited with creating the world. I also learned about Loki, the trickster god and companion of Odin, who helped him with clever plans but sometimes caused a world of trouble (literally).

It is easy to see some similarities between Odin and Loki, and Christianity’s God and Satan, though Norse mythology is far less black and white. Odin and Loki often work together to teach mankind lessons, both directly and through their own failings.

All in all, a fascinating experience.

Which is why I was beyond thrilled to find a package from my friends at Wunderkind, waiting for me when I got home.

The Gospel of Loki, by Joanne M. Harris, is scheduled for release on May 5th and at first, I thought I was going to have a chance to delve deeper into the Norse myth of Loki, which in and of itself would have been a treat.

However, what I really received was so much more fun.

Now this may come as a shock, but my favorite type of humor is that which is liberally tinged with irreverence. In other words, I like no one I like better than someone with the ability to poke fun at topics which are normally taken seriously by everyone else.

So it was with utter delight that, as I delved into The Gospel of Loki, I found myself not back at the Field Museum, but instead in a world where Neil Gaiman’s angel Aziraphale and the demon Crowley (Good Omens – one of my fav’s) would have felt right at home.

With his notorious reputation for trickery and deception, and an ability to cause as many problems as he solves, Loki is a Norse god like no other. Demon-born, he is viewed with deepest suspicion by his fellow gods who will never accept him as one of their own… For this Loki vows to take his revenge.

But while Loki is planning the downfall of Asgard and the humiliation of his tormentors, greater powers are conspiring against the gods and a battle is brewing that will change the fate of the Worlds.

From his recruitment by Odin from the realm of Chaos, through his years as the go-to man of Asgard, to his fall from grace in the build-up to Ragnarok, this is the unofficial history of the world’s ultimate trickster.

So far, I have found that Harris provides a wonderful vehicle for Loki’s dark voice. He fascinates the gods and goddesses, but nobody likes him and Harris’ tale tells of the rise of a cheeky, ever-hungry bad boy who somehow ends up with a heart full of barbed wire.

Nobody loves Loki. And the cosmos is going to pay for it…

If Harris’ name sounds familiar, it might be because her novel Chocolat was turned into a feature film starring Johnny Depp. Genre fans may perhaps know her best for her 2007 fantasy novel Runemarks, or for its sequel, Runelight (2011).

But this new journey into the world of gods draws from her lifelong fascination of Norse mythology, and clearly her substantial sense of humor.

Thank you Joanne. Thank you very much.