When I was running SF Site in the late 90s, I got hundreds of review books every year. Many appealed to me, though I had time to read almost none, and instead assigned them to our freelance reviewers. (Isn’t that always the way? You can have plenty of books, or you can have plenty of time, but you can never have both.)

Anyway, in the intervening 15+ years, I’ve long since forgotten most of the delightful volumes that passed through my hands. Yesterday I was in my basement — excuse me, the Cave of Wonders — making room for recent arrivals, packing up nearly a thousand old review copies to store in the attic, when I came across my dust-covered copy of Sunderlies Seeking, the first novel in Ghatten’s Gambit, a two-volume fantasy series published by DAW in 1998 and 2000.

I did remember Sunderlies Seeking. Even after 17 years, I recalled Mark Hess’s great cover and the evocative description on the back, promising a tale of adventure in a land of “convicts, rebels, and the unwanted refuse of society.” Not to mention a pair of friendly cats on the cover, helping sail a ship into the harbor. I’d never heard of author Gayle Greeno before Sunderlies Seeking crossed my desk in 1998, but after it did I sought out her other novels with great interest.

There are only six. The Farthest Seeking (2000), the second and final novel in Ghatten’s Gambit, was the last book Gayle Greeno published.

I’m not sure why. It doesn’t appear to be the usual reason writers stop writing — lack of sales. Greeno’s first three books, The Ghatti’s Tale trilogy, were steady sellers for DAW — and indeed, the first and third books are STILL in print, over two decades after they were first released.

The covers for Finders-Seekers and Exiles’ Return were both by Braldt Bralds; Mind-Speakers’ Call was painted by Mark Hess. All three were published in the mid-90s.

I know very little about Gayle Greeno, and for a while I wondered if the name might be a pseudonym. However, according to some reports she was an employee at NAL/Penguin (distributors of DAW), in the marketing department.

At their core, the Ghatti books are legal mysteries with a dash of adventure sf, although with a definite fantasy feel. The strong animal bonding theme clearly added to the appeal for a lot of readers. Most fantasy novels are out of print after just a few months… for these to stay in print for over two decades is an amazing achievement, and proves the books have an enduring appeal.

Here’s the book description for Finders Seekers, the first book in The Ghatti’s Tale.

Their technological resources destroyed, a colonizing expedition from Earth has been stranded on the world of Methuen for over two hundred years. Their continued survival is largely due to the organization of healers known as the Eumedicos and to the Seekers Veritas, a unique group composed of pairs of Bondmates, one human and one ghatti — a telepathic catlike being native to Methuen who bonds with a specific human for life. These Bondmates travel from town to town, settling disputes by truth-reading the minds and emotions of plaintiffs and defendants. While most people respect the Seekers, there are those who fear the ghatti powers. And now someone has begun attacking Seeker pairs.

What no one knows is that this destroyer has targeted one specific pair of Bondmates as special victims — the woman Doyce and the ghatta Khar’pern. For the key to defeating this deadly foe is locked away in Doyce’s mind behind barriers even her ghattas has never been able to break down.

In this first novel set on the far world of Methuen, Earth colonists have been stranded for two centuries with very little of their technological resources intact. Their continued survival relies on the Seekers Veritas, made up of Bondmates — one human and one ghatti (telepathic catlike beings native to the planet). Now, an unknown enemy is launching a lethal attack against the Seekers. 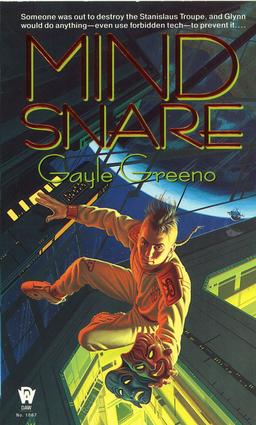 And here’s the blurb for Sunderlies Seeking, the first book in the follow-up series, Ghatten’s Gambit. This is the one that first got my attention.

The Sunerlies — home to convicts, rebels, and the unwanted refuse of society — or so it has traditional been. Even now it is a land where, for the law-abiding population, the price of safety is eternal vigilance.

For Doyce’s and Jenret’s sixteen-year-old twins, Jenneth and her brother Diccon, the very name is a summons to exotic adventure. So when Jenret proposes taking them — and any friends who wish to make the journey — along on a business trip to the Sunerlies, the twins can hardly contain their excitement. The only thing more thrilling is the newfound bond Jenneth has made with the ghatten Pw’eek and Diccon with her sister ghatten Kwee.

Yet almost from the start the journey seems overshadowed with bad luck — or evil intent. Though Doyce, newly retired from the position of Seeker General, has come along in the hopes of restrengthening her emotional ties with her husband Jenret, they seem to be caught in a kind of private war neither can control. And before the party even sets sail, “accidents” begin to occur. First Doyce is thrown by her mount. Next a campfire explosion menaces Jenneth, Diccon, and the other children. Yet despite these ill omens, they are determined not to turn back.

But the real disaster strikes at sea, when a storm sweeps Jenneth and Pw’eek overboard. Desperate to find his lost twin, Diccon has no way of knowing what the worst of all of them still lies ahead — in the Sunerlies, where a once-vanquished and long-vanished enemy waits — a fanatic determined to eradicate Resonates and Seekers alike…

Greeno published one additional book with DAW, an adventure SF novel titled Mind Snare, in 1997. Her last book was The Farthest Seeking in 2000.

Sunderlies Seeking was published by DAW in November 1998. It is 570 pages, priced at $6.99 for both the paperback and digital versions. The cover is by Mark Hess. It is currently out of print, but available in digital format.

The Farthest Seeking was published in June 2000 by DAW Books. It is 676 pages, priced at $6.99 for both the paperback and digital versions. The cover is by Paul Youll. It’s also out of print, but available digitally.

See all of our rcent Vintage Treasures here.

This is an older post, but just wanted to say thanks for the info… I am currently re-reading these books (for the 3rd time since purchase over 10 years ago) and will be finishing up The Farthest Seeking within the day or two… As an avid Cat Lover, I really enjoy these books…

“A few years ago, I found a book 3 of the Ghatten’s Gambit series that wrapped up what happened to everyone – Khar Pern and her mate went to live in the mountain where time is slowed down, original Ghatta’s died – it was a sad book, but it tied up the series. I was told it was out of print when I found it at the library…”

Any chance this could be true and if so, how would one go about locating the book? Of course, the poster could be confusing the book with another, but it would be great to wrap up the series…

In this age of self-published books, you can never be 100% certain about anything. But to be truthful, I’m highly doubtful. There is absolutely no record of a third Ghatten’s Gambit novel. Goodreads lists only two:

And so does Wikipedia:

Perhaps there’s a short story out there that wraps up the tale? I’ll keep searching.

Thanks John… I don’t have much hope either… I looked through several pages of Google results in a search using different terms and came up with nothing outside of that Amazon post. I also sent the poster an email asking for the books’ title and am hoping to hear back, but the post was from a couple of years ago and may not be a current address. I appreciate your consideration and I’ll let you know if she gets back to me with any info.
Sharon

Thanks Sharon – by all means keep us posted!

Gayle Greeno quit writing because she died. It was on her website years ago, which is gone now. Unfortunately, no one seemed to notice.

And so does the page her publisher hosts for her:

And the Internet Science Fiction Database:

I’m very sad to hear that. There’s very little current info of ANY kind I can find on Gayle Greeno on the internet. There’s a Facebook page, but it’s essentially empty.

I was surprised that no other books have been published either. The last book “Farthest Seeking” was dedicated to a relative (father/grandfather) G Alfred Greeno, deceased November 10, 1999. I located him in social security death records and also on Find A Grave website, but did not locate anything on Gayle. So my feeling is she is not deceased. Maybe when her relative died, she lost her muse.

Nice detective work, winters7468! Who knows what the truth is. This genre is filled with literary mysteries, and the fate of Gayle Greeno is one of the more intriguing.

More info about Gayle Greeno. I was able to locate a relative on ancestry who mentioned G Alfred Greeno. I sent him an email and he confirmed that G Alfred Greeno was her father and also that her mother, Doris, passed away in 2004. He stated that Gayle is still living and resides in the family home in Queensbury, NY. I haven’t asked him yet if he knows anything about her writing.

That sounds very promising, winters7468. Keep us posted on anything else you find out!

I’d love to be able to interview her. She has a small but dedicated fan base, even after all these years.