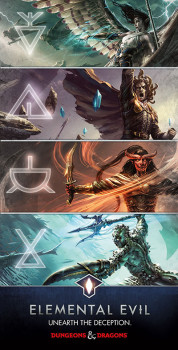 The Dungeons & Dragons world is ramping up for their major event for 2015, which is the Elemental Evil storyline. I previously discussed this when it was first announced, but it’s worth mentioning again for one important reason: they’ve put out some free gaming materials!

Recently, Dungeons & Dragons released the Elemental Evil Player’s Companion as a free supplement, available through both their website and DriveThruRPG. This 25-page digital supplement contains some good material, a set of new races and spells designed specifically for use with 5th edition Dungeons and Dragons. The 9 of the pages are devoted to descriptions, details, and character creation information for 4 races:

There are also 13 pages of spell lists and descriptions, featuring a total of 43 spells, almost all of them linked to the four elements (or their related damage type, such as the acid-based spell Vitriolic Sphere).

The Elemental Evil storyline is rolling out across a variety of platforms throughout 2015. The newest D&D Encounters season of play began yesterday, with adventures set firmly within the narrative about these elemental cults. Each week, the D&D Encounters groups around the country (or, likely, world) will be playing through a portion of the Princes of the Apocalypse adventure. You can locate a nearby D&D Encounters group on the D&D website. For those who aren’t part of the group, the Princes of the Apocalypse adventure for levels 1 through 7 is slated for release on April 7 for sale to the general public.

If digital gaming is more your thing, then watch for Elemental Evil content to begin showing up in the Neverwinter through an upcoming Elemental Evil expansion module.

In addition, watch for the upcoming Temple of Elemental Evil board game, also slated for a mid-April release, as well as an Elemental Evil-themed series of miniatures through WizKids miniature line.

Again, you can find local gaming store through the Wizards of the Coast website … but my guess is that if you’re reading this, you already know where the nearest one is. So get ready to start your pre-ordering!

Quite an exciting post Andrew. But I still don’t get the hype or possibly over the top worship (sic) of the temple

Then again as a RuneQuester, Even though not a Gloranthafile I suppose I revere the likes of Pavis, so maybe there is a kindred understanding after all.

It appears that D&D is going to be fuled entirely on nostalgia from here hon. Just reheating the same stuff that had been popular for two, three, or even four editions.We’re probably going to see some more Island of Dread, Tomb of Horror, and Vault of the Drow in the coming years.

Tyranny of dragons was rehashed?