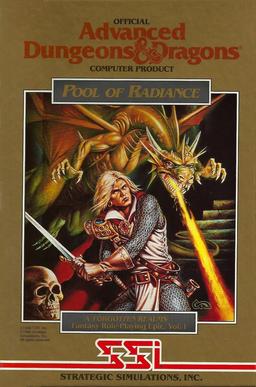 It’s tough for me to look back and pick just one favorite computer game. Sword of Aragon, Dragon Wars, Wizardry, Starflight, Starcraft, Diablo… there were so many classic games that offered marvelous interactive adventures in the early days of home computing.

But more and more as the years go by, I find myself calling out SSI’s Pool of Radiance, and the groundbreaking Gold Box series of Dungeons and Dragons games it spawned, as the best computer games I’ve ever played.

The Gold Box series was built on Wizard’s Crown, a top-down tactical RPG designed by Paul Murray and Keith Brors and released by SSI in 1985. Keith Brors became the lead designer for Pool of Radiance, which was published in 1988. Pool of Radiance was one of the top-selling computer games of all time, and over the next 10 years more than two million Gold Box titles were sold. All told there were nearly a dozen Gold Box games released, and SSI spun off other RPGs using the same engine, including the Buck Rogers and Spelljammer games.

SSI was eventually sold to Mindscape, and the era of the Gold Box games came to and end. But now a handful of SSI veterans, including Paul Murray and producer David Shelley, have formed a new company, Tactical Simulations Interactive (TSI), to produce brand new titles in the spirit of the Gold Box games. Their first release, Seven Dragon Saga, is being funded on Kickstarter.

Players of Seven Dragon Saga will control of six characters, the Touched, commanded by the Emperor to reclaim the wild Drakelands, which they must explore, tame and conquer, and eventually bring back into the Empire. Game development is already well advanced, and the demos included in the Kickstarter video look very promising indeed — and nicely reminiscent of both the Gold Box games, and later D&D classics like Baldur’s Gate.

I played almost all of the gold box games back in the day.