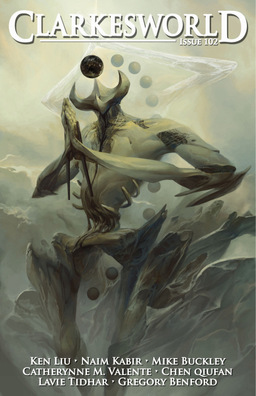 The latest issue of Clarkesworld, one of the most acclaimed fiction mags on the market, went on sale last week. Issue 102 contains seven short stories:

Slowly Builds An Empire, by Naim Kabir
Cassandra by Ken Liu
The Long Goodnight of Violet Wild (Part 2) by Catherynne M. Valente
All Original Brightness by Mike Buckley
Coming of the Light by Chen Qiufan
The Clear Blue Seas of Luna by Gregory Benford
The Book Seller by Lavie Tidhar

Non-fiction includes “Dark Angels: Insects in the Films of Guillermo del Toro,” by Orrin Grey, “Another Word: A Shed of One’s Own,” by Chuck Wendig, interviews with Randy Henderson and Silvia Morena-Garcia, and Chen Qiufan, and an editorial, “Reader’s Poll Winners, Nebulas, and Forever,” by Neil Clarke. This issue’s podcast is “Slowly Builds An Empire,” by Naim Kabir, read by Kate Baker.

We last covered Clarkesworld with Issue 101. Clarkesworld 102 was edited by Neil Clarke and Sean Wallace, and published by Wyrm Publishing. The contents are available for free online; individual issues can be purchased for $3.99, and monthly subscriptions are $2.99/month. A 6-month sub is $17.94, and the annual price is $35.88. Learn more and order individual issues at the magazine’s website.

This issue’s cover, “Keter,” is by Peter Mohrbacher. See the complete issue here.

[…] Back in December we covered last year’s volume, Clarkesworld: Year Six, and you can check out the most recent issue the magazine, Clarkesworld 102, here. […]