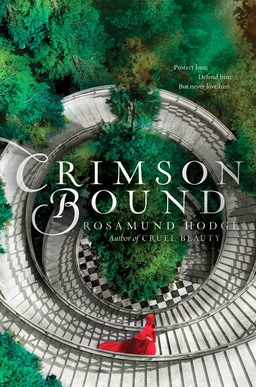 Rosamund Hodge’s short story “Apotheosis” (Black Gate 15) was a marvelously original tale of three brothers who undertake a voyage across a vast sea only six inches deep, to find a new god for their small village. Her first novel, Cruel Beauty, mixed Greek mythology with Beauty and the Beast to create a tale of adventure and romance (read the first 59 pages at the HarperCollins Web Sampler).

Her second novel, Crimson Bound, is due May 5 from Balzer + Bray. This one is a dark fantasy inspired by Little Red Riding Hood, the fairy tale The Girl With No Hands, and Norse mythology.

When Rachelle was fifteen she was good — apprenticed to her aunt and in training to protect her village from dark magic. But she was also reckless — straying from the forest path in search of a way to free her world from the threat of eternal darkness. After an illicit meeting goes dreadfully wrong, Rachelle is forced to make a terrible choice that binds her to the very evil she had hoped to defeat.

Three years later, Rachelle has given her life to serving the realm, fighting deadly creatures in a vain effort to atone. When the king orders her to guard his son Armand — the man she hates most — Rachelle forces Armand to help her hunt for the legendary sword that might save their world. Together, they navigate the opulent world of the courtly elite, where beauty and power reign and no one can be trusted. And as the two become unexpected allies, they discover far-reaching conspiracies, hidden magic… and a love that may be their undoing. Within a palace built on unbelievable wealth and dangerous secrets, can Rachelle discover the truth and stop the fall of endless night?