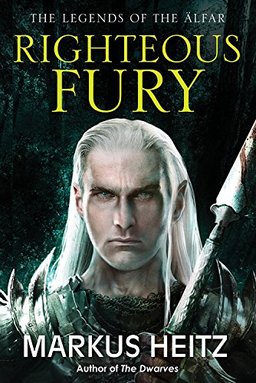 American readers, I think, could use a little more exposure to European fantasy. So I’m pleased to see Jo Fletcher Books bringing German author Markus Heitz to this side of the pond.

His series The Dwarves was an international bestseller, and now he launches a brand new series with Righteous Fury, originally published in Germany in 2009.

In Dsôn Faïmon, realm of the cruel and surpassingly beautiful artist-warriors known as the älfar, the military is planning a campaign against the enemies of the empire. Caphalor and Sinthoras are separately looking to enlist a powerful demon to strengthen their army, but the two älfar have very different goals.

While Caphalor is determined to defend the borders of the empire, the ambitious Sinthoras is intent on invasion. In order to expand the borders of Dsôn Faïmon, he has set his sights on the kingdoms of dwarves, elves, and men — a decision that, should it come to pass, may have far-reaching consequences for him and for the älfar.

Righteous Fury, the first volume of The Legends of the Älfar, was published by Jo Fletcher Books on February 10, 2015. It is 402 pages, priced at $24.99 in hardcover and $11.99 for the digital edition. It was translated from the German by Shelagh Alabaster.