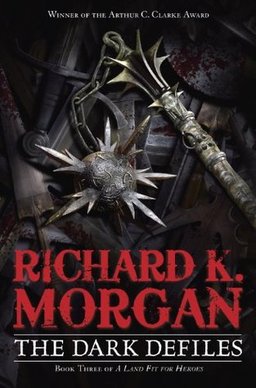 I can’t read all the fantasy books out there. I can’t even read all the really great stuff. Fortunately, I’m surrounded by a superb team of reviewers who keep me on top of things.

When Richard K. Morgan published his highly acclaimed first fantasy novel back in 2009, I totally missed it. But John C. Hocking didn’t, and in his review in Black Gate 13 he called it:

One of the most unusual, powerful, and daring sword & sorcery novels to see print for decades… The Steel Remains follows a trio of characters, each of whom played a dramatic part in humanity’s grim battle with the Scaled Folk — reptilian invaders from the sea, defeated several years past… As the three heroes are slowly drawn back together, a threat older and even more alien than the Scaled Folk moves into the world. Ringil and his friends will meet it with steel.

A sequel, The Cold Commands, followed in 2011, introducing the dark prophecy of the Illwrack Changeling, a boy raised to manhood in a ghostly between-world realm, whose return would be catastrophic for the fragile land. And late last year the final novel in what’s now being called a trilogy finally arrived. As the world teeters towards another war with the dragon folk, Ringil and his companions find the prophecy of a dark lord may be coming true very close to home.

Here’s the publisher’s description for The Dark Defiles, the closing volume of Land Fit for Heroes.

Ringil Eskiath, a reluctant hero viewed as a corrupt degenerate by the very people who demand his help, has traveled far in search of the Illwrack Changeling, a deathless human sorcerer-warrior raised by the bloodthirsty Aldrain, former rulers of the world. Separated from his companions — Egar the Dragonbane and Archeth — Ringil risks his soul to master a deadly magic that alone can challenge the might of the Changeling. While Archeth and the Dragonbane embark on a trail of blood and tears that ends up exposing long-buried secrets, Ringil finds himself tested as never before, with his life and all existence hanging in the balance.

I really liked Morgan’s SF/cyber-noir novels, have yet to check out his fantasy but intend to.

Now for the real reason I’m commenting — I wish more cover artists understood the first thing about weapons. That thing on the cover is a joke, sticking a morning star on top of a flanged mace? Real practical, I’m sure that chain wouldn’t get snagged on those flanges or anything. Insult my intelligence some more.

One of my favorite awful weapon depictions of recent years: http://aidanmoher.com/blog/wp-content/uploads/2011/08/best-served-cold-by-joe-abercrombie-trade.jpg

A cut and thrust sword straight out of the windlass steelcrafts catalog, at least twice the size it should be. Looks idiotic. It even has the threaded, machined pommel of the modern windlass reproduction, which is clearly what it’s based on. No one that knew the first thing about swords would stick that on something intended to evoke a pre-industrial era blade. Lazy.

Would be nice if some of these artists and the art dept bosses that OK these covers would read a few references before just grabbing images off the net and sticking them on book covers. But hey, it’s fantasy, who cares, right?

Well, I do. It dumbs down the genre, and shows what power the uninformed and careless have over how books are presented. You’d almost think they had contempt for their audience, and by extension the authors themselves. You certainly don’t need any expertise to find that mace/morning star amalgam ridiculous, just common sense.

Well, the morning star looks like it’s spray painted anyway. Cover attists are almost always terrible and I absolutely hate the current fashion of giving a good photoshop treatment to cheesy photographs. If I were to see those in a bookstore, I wouldn’t even give it a second look or remember it was there at all. If you can’t do afford good art make the good solid green or brown instead. Looks always much more promissing.

Not sure how I feel about a plot that revolves around a prophecy (or rather I am, and that feeling is urgh!), but otherwise the story sounds pretty intriguing.

This was a great trilogy. I will admit I had my misgivings before starting The Steel Remains. As flaming heterosexual, debatable womanizer, I wasn’t sure I could dig a story where the main character is a homosexual. Not out of being a homophope cause I’m not, but I just like to be able to relate to the character, and -the big thing-, I hate when authors do a thing just to be doing it. Not so much as shock value but just to be like “look at me, look I did something no other author has the balls to do”.
But Morgan did not do that. The charcters’ sexuality is key element of the story because it makes him an outcast or a rebel and that I could relate to.
Awesome books all around. Darkness Defiles is the weakest of the three but that’s only because the first two are so great.

> That thing on the cover is a joke, sticking a morning star on top of a flanged mace?
> Real practical, I’m sure that chain wouldn’t get snagged on those flanges or anything.

Ha! Right you are.

Sadly though, I think you’re probably in the minority. The recent trend in fantasy art — especially big budget, wide-exposure fantasy — is for huge, ridiculously over the top weapons. I blame anime, and especially Cloud and his Buster sword, from Final Fantasy VII:

And of course, the insane weapons of the popular Warhammer 40K franchise:

Frankly, I don’t blame art directors for putting over-the-top weapons on a cover these days. Use a realistic weapon, and your average 17-year-old reader won’t even give it a second glance.

> Not sure how I feel about a plot that revolves around a prophecy (or rather I am, and that feeling is urgh!),
> but otherwise the story sounds pretty intriguing.

Yeah, I know what you mean. I hesitated before putting that quote on there for just that reason. They’ve been overdone, but you can’t beat a good prophecy for smoldering dramatic tension.

> The charcters’ sexuality is key element of the story because it makes him an outcast or a rebel and that I could relate to.

Well said. I know a handful of readers who find gay characters uncomfortable, even today. I salute you for putting your misgivings aside and trying the book anyway.

I’m so glad I did read this series. Not only is it just flat-out awesome. It did get me over that uncomfortablness, that you mentioned.
I didn’t even bat and eye when I read Mark Smyle’s The Barrow.