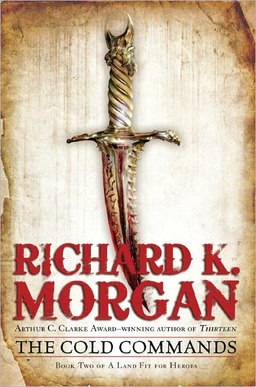 Way back in Black Gate 13, the distinguished John C. Hocking contributed a feature review of Richard K. Morgan’s first fantasy novel and it alerted me to the fact that I was missing out on a major new work of sword & sorcery.

Here’s what he said, in part:

Richard K Morgan has made a name for himself with a chain of dark, slickly written science fiction thrillers… one might reasonably expect Morgan to continue in that style… Instead, he has written one of the most unusual, powerful, and daring sword & sorcery novels to see print for decades.

The Steel Remains follows a trio of characters, each of whom played a dramatic part in humanity’s grim battle with the Scaled Folk — reptilian invaders from the sea, defeated several years past…

As the three heroes are slowly drawn back together, a threat older and even more alien than the Scaled Folk moves into the world. Ringil and his friends will meet it with steel.

You can see why I was intrigued. Can that Hocking fellow write a review or what?

I’m a little late to talk about the sequel, The Cold Commands, especially in a column that ostensibly deals exclusively with the latest releases. But I just discovered it, so I’m going to do it anyway (I blame Hocking.)

The Cold Commands was released in in hardcover in 2011. It is subtitled Book Two of A Land For Heroes. You know what that means: now that there are two books, Morgan was forced to come up with a name for his series. 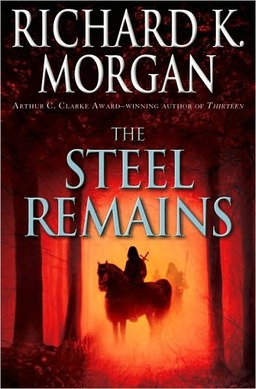 Here’s the blurb on the inside jacket:

Now Morgan continues the riveting saga of Ringil Eskiath — Gil, for short — a peerless warrior whose love for other men has made him an outcast and pariah.

Only a select few have earned the right to call Gil friend. One is Egar, the Dragonbane, a fierce Majak fighter who comes to respect a heart as savage and loyal as his own. Another is Archeth, the last remaining daughter of an otherworldly race called the Kiriath, who once used their advanced technology to save the world from the dark magic of the Aldrain — only to depart for reasons as mysterious as their arrival. Yet even Egar and Archeth have learned to fear the doom that clings to their friend like a grim shadow… or the curse of a bitter god.

Now one of the Kiriath’s uncanny machine intelligences has fallen from orbit—with a message that humanity faces a grave new danger (or, rather, an ancient one): a creature called the Illwrack Changeling, a boy raised to manhood in the ghostly between-world realm of the Grey Places, home to the Aldrain. A human raised as one of them — and, some say, the lover of one of their greatest warriors — until, in a time lost to legend, he was vanquished. Wrapped in sorcerous slumber, hidden away on an island that drifts between this world and the Grey Places, the Illwrack Changeling is stirring. And when he wakes, the Aldrain will rally to him and return in force — this time without the Kiriath to stop them.

An expedition is outfitted for the long and arduous sea journey to find the lost island of the Illwrack Changeling. Aboard are Gil, Egar, and Archeth: each fleeing from ghosts of the past, each seeking redemption in whatever lies ahead. But redemption doesn’t come cheap these days. Nor, for that matter, does survival. Not even for Ringil Eskiath. Or anyone — god or mortal — who would seek to use him as a pawn.

Richard K. Morgan is also the author of Altered Carbon, Broken Angels, Woken Furies, Market Forces, and the Arthur C. Clarke Award-winning Thirteen. No word on whether we can expect A Land For Heroes to be a trilogy or something considerably longer, but I’ll probably be the last to know anyway. Hear that, Mr. Hocking? I’m counting on you to keep me posted.