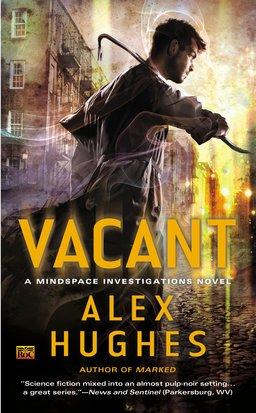 Alex C. Hughes’s Mindspace Investigations series has now reached Book 4, and I think it’s time I checked them out. The Parkersburg, WV News and Sentinel calls her novels “Science fiction mixed into an almost pulp-noir setting… a great series,” and that’s enough to catch my attention. The books are futuristic murder mysteries set 60 years after devastating Tech Wars nearly destroyed the planet. Adam, an ex-addict kicked out of the Telepath’s Guild, is now working for the police, gradually re-building his shattered reputation with a series of adventures that James Knapp calls “A fun blend of Chinatown and Blade Runner.”

Nothing ruins a romantic evening like a brawl with lowlifes — especially when one of them later turns up dead and my date, Detective Isabella Cherabino, is the #1 suspect. My history with the Atlanta PD on both sides of the law makes me an unreliable witness, so while Cherabino is suspended, I’m paying my bills by taking an FBI gig.

I’ve been hired to play telepathic bodyguard for Tommy, the ten-year-old son of a superior court judge in Savannah presiding over the murder trial of a mob-connected mogul. After an attempt on the kid’s life, the Feds believe he’s been targeted by the businessman’s “associates.”

Turns out, Tommy’s a nascent telepath, so I’m trying to help him get a handle on his Ability. But it doesn’t take a mind reader to see that there’s something going on with this kid’s parents that’s stressing him out more than a death threat…