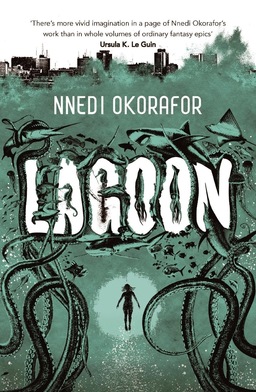 When Nnedi Okorafor’s first novel for adults, Who Fears Death, won the 2011 World Fantasy Award, a lot of people sat up and took notice.

It was also a 2011 Tiptree Honor Book, and a Nebula nominee. She followed it up the same year with her third YA title, Akata Witch, a Junior Library Guild Selection and an Andre Norton Award nominee. Her first collection, Kabu Kabu, appeared from Prime Books in 2013 — with a foreword by Whoopi Goldberg.

But it’s her second novel for adults that looks like it will really put her on the map. A tale of a strange alien invasion just offshore of the Nigerian city of Lagos, Lagoon has been getting a lot of the right kind of attention. It’s not yet for sale in the US, but it’s worth the effort to track drown a copy of the British edition.

Three strangers, each isolated by his or her own problems: Adaora, the marine biologist. Anthony, the rapper famous throughout Africa. Agu, the troubled soldier. Wandering Bar Beach in Lagos, Nigeria’s legendary mega-city, they’re more alone than they’ve ever been before.

But when something like a meteorite plunges into the ocean and a tidal wave overcomes them, these three people will find themselves bound together in ways they could never imagine. Together with Ayodele, a visitor from beyond the stars, they must race through Lagos and against time itself in order to save the city, the world… and themselves.

[…] won the 2011 World Fantasy Award, and was nominated for a Nebula. Her most recent releases include Lagoon and The Book of […]