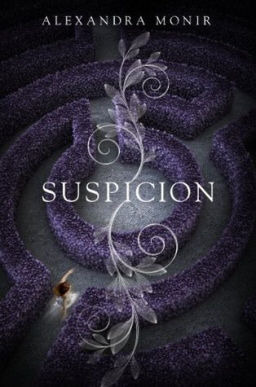 Every reader has a guilty pleasure. I know people who secretly read Warhammer 40K novels on their lunch hours. Not me — those books are great, and I read them proudly. (Except for Graham McNeill’s A Thousand Sons, which made me cry. I read that stupid thing three times, and I hate it every time. Magnus the Red, you’re a big doofus.)

No, my guilty pleasure is supernatural romances. It used to be easier to get away with the occasional peek, until my daughter caught me stealing her books and gave me that Dad, you’re being weird look. But honey, I just read them for the articles.

I knew Suspicion was going to be hard to resist the moment Taylor brought it home. I love books with creepy mazes. Plus Jessica Brody described the book as “If Alfred Hitchcock had directed Downton Abbey,” which, let’s face it, doesn’t make matters any easier. The killing blow was Amy Plum’s blurb on the back cover: “Take The Princess Diaries and add magic, murder, and mystery and you’ve got Suspicion.” Aaargh. I love all those things. Now I’m secretly reading it late at night, and I hope no one sees me.

“There’s something hidden in the maze.”

Seventeen-year-old Imogen Rockford has never forgotten the last words her father said to her, before the blazing fire that consumed him, her mother, and the gardens of her family’s English country manor.

For seven years, images of her parents’ death have haunted Imogen’s dreams. In an effort to escape the past, she leaves Rockford Manor and moves to New York City with her new guardians. But some attachments prove impossible to shake — including her love for her handsome neighbor Sebastian Stanhope. Then a life-altering letter arrives that forces Imogen to return to the manor in England, where she quickly learns that dark secrets lurk behind Rockford’s aristocratic exterior. At their center is Imogen herself — and Sebastian, the boy she never stopped loving.

Suspicion was published on December 9 by Delacorte Press. It is 295 pages, priced at $17.99 in hardcover and $11.99 for the digital version. The cover was designed by Alison Impey.

So of course your comments on A Thousand Sons makes me go look for it, and I find out it’s book #12 in a series — so now how in the world am I going to register the same impact as you if I don’t read the entire series? But now you’re asking for commitment, so I’ll offer you a deal Mr. O’Neill: I’ll read the Horus Heresy series if you’ll read Erikson’s Malazan Book of the Fallen 🙂

Oh, and I recommended this Suspicion to my daughter.

Actually, A THOUSAND SONS was the first Horus Heresy book I read, and it triggered an obsessive interest in the entire series. I’m reading GALAXY IN FLAMES (#3) right now. You can enjoy them in any order, as they deal with very different characters and events across about a hundred-year period.

Is there an audiobook version of Erikson’s Malazan Book of the Fallen? That’s how I started the HORUS HERESY books. I don’t have the time to commit to a 12-volume series, but I’m stuck in my car for three hours every day to and from work…

Well that could definitely work, 6 hours of Malazan a day is about the best Christmas present of all time 😉

I’ll take a look at A Thousand Sons…

Thank you for talking about liking the supernatural romances. As the spouse of a man who loves Jane Austen adaptations and broadway musicals, I appreciate the gutsiness.