Do you enjoy the fantasy novels of Emily Drake, author of the popular The Magickers series? What about the contemporary horror of Anne Knight, author of Death Storm? Perhaps you’re more partial to the light fantasy of R.A.V. Salsitz, author of Night of Dragons and The Unicorn Dancer novels. Or the military science fiction of Charles Ingrid, author of the long-running Sand Wars series. Or maybe the dark fantasy of Jenna Rhodes (The Dark Ferryman).

Possibly you’ve enjoyed them all, as they’re all written by the same person.

It’s not unusual for popular writers to use a pseudonym in this industry — indeed, even multiple pseudonyms. But in a field where almost everyone seems to have a secret identity or two, R.A.V. Salsitz still stands out. She has an amazing number of pseudonyms, and has published successfully in numerous genres, including epic fantasy, horror, mystery, game books, YA, military science fiction, romance, and urban fantasy. Her first novel was Her Secret Self, published by Bantam in 1982; since then she’s published dozens more.

While Salsitz has a fine stable of names to choose from, since 2000 she’s published under only two: Emily Drake (most recently the fourth novel in The Magickers, Gate of Bones, in Sept 2004) and Jenna Rhodes.

Since 2006 she’s published exclusively under the name Jenna Rhodes, starting with the first novel in The Elven Ways, The Four Forges, in May 2006. Sequel The Dark Ferryman appeared in June 2008. 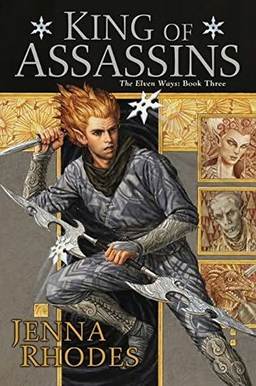 The long-awaited third novel in the series, King of Assassins, finally arrived earlier this month.

Thrown into exile on Kerith by a sorcerous act of war, the Vaelinars have used their own unique talents to gain power over the races native to this world, and to create magical Ways that remold Kerith forever. But now their war has followed them, ripping holes in the fabrics of both universes. The Vaelinars stand at a dangerous threshold as old and new betrayals threaten the destinies of the peoples of two worlds.

Against this background of betrayal and ever-shifting alliances, two star-crossed lovers — the half-breed Sevryn and the orphaned, goddess-touched Vaelinar, Rivergrace — must escape the fury of a desperate ruler. The Warrior Queen Lariel, having accidentally revealed to Sevryn the forbidden powers that gained her the throne, has begun a vicious manhunt to destroy him. Fleeing her wrath, Sevryn and Rivergrace find no safe haven as the world’s magic begins to disintegrate around them and the old Gods wake.

In the midst of this chaos, Sevryn is charged with finding the King of Assassins — a quest that may consume him. And only Rivergrace has any hope of discovering the means to save both Sevryn and the world she loves.