NaNoWriMo rumbles on. Some of my friends report impressive word counts. Others are strangely silent. Possibly some of these last have plotted themselves into a corner. The best way around this is to consider your conflicts, who the players are, but I’ve talked about that. However, I suspect a lot of people who are stalled have got caught up in a war of attrition with the mechanics of narrative.

We take narrative for granted. It’s what we do in the pub, or when swapping stories with fellow con-goers. However, if we sit down to write — type — narrative, we suddenly become aware of the words themselves. It’s a bit like driving a car and being overwhelmed with the physics of it all. From there it’s easy to get lost in a warren of second guessing, sniped at by injunctions we picked up at school; use joining words, be elegant, write complete sentences etc etc.

Finding your groove is about getting the hang of dragooning the words into some kind of order without needing to think about it all the time.

Some people do this naturally or get there by trial and error. Others learn how to do this by following their natural inclination and having a really good think about it so they can then stop thinking about it. It’s the Geek Way.

That’s what I’m going to do here. Specifically, I’m going to pull apart a selection of passages from genre books on my Kindle so we can see how established authors do it…

Stomach knotting, I raised my gun, kicked the door. It crashed open on a room full of screaming, writhing things.

I’m using white text to indicate character content, olive for the world. Sometimes their world can include the character’s body or even their mind, but only when viewed in a detached way:

My stomach spasmed. I coughed, tasted blood. I hefted the gun and dragged myself onward. I didn’t have long to finish this thing.

So, let’s start with one of our forefathers, the immortal Robert E Howard:

The sun was setting as Kane came over the brow of the low hill which debouched into the upland fen. Huge and blood-red it sank down behind the sullen horizon of the moors, seeming to touch the rank grass with fire; so for a moment the watcher seemed to be gazing out across a sea of blood. Then the dark shadows came gliding from the east, the western blaze faded, and Solomon Kane struck out boldly in the gathering darkness. The road was dim from disuse but was clearly defined. Kane went swiftly but warily, sword and pistols at hand. Stars blinked out and night winds whispered among the grass like weeping spectres. The moon began to rise, lean and haggard, like a skull among the stars.
(Howard, Robert E. (2013-09-30). Complete Works of Robert E. Howard. Minerva Classics. Kindle Edition.)

Look how Howard keeps world and character separate! He doesn’t jumble them up with what crit groups call “filtering”, that is words referring to the actions of seeing or perceiving. He could have laced the text with things like, “He saw the dark shadows… He saw the stars blink out…” but he didn’t.

First filtering sucks time. Writers prefer not to repeat the same word time and again (unless it’s “said” which is invisible, thank god). Most of a character’s perception is of the outside world, so you end up trying to find a zillion synonyms for “saw”.

I give in! And that’s just one paragraph. As we Scots say, “Gonnae no dae that?”

Second, filtering sucks the life out of a story. It puts a barrier up between the reader and your lovingly crafted story world. Yes, the world is usually being described  from a character’s point of view, but if you keep reminding the reader of that then you lose the ability to draw them into another world view.

OK. Time for another one from somebody who is most definitely an “heir to Howard”:

His legs burned; his lungs ached.

He reached the road, saw the border ring of ruins just ahead. It was twenty paces away, ten.

He stumbled with fatigue. He managed to keep his balance, but the error had cost him. The Vwynn behind him gained, closed on him, their snarls hot in his ear. He prepared to turn, fight, and die.

Crossbow bolts sizzled out of the dark, whistling past his ear. They struck Vwynn flesh with heavy thunks, summoning screams and angry shrieks.

The hiresword stood on the road, in the pseudotunnel, just inside the tall ring of ruins. Baras and two of the other guards stood beside Jyme, all of them now reloading crossbows.

Again, Kemp keeps the world and character separate. The one bit of apparent filtering, “saw”, is really being used as an action in the vein of “gained” or “reached”.

The world in this passage is one of pain and danger and we can see several players at work:  the viewpoint character, fatigue (all that aching lungs and stumbling), the Vwynn whatever they are, and a squad of crossbowmen. You could set it out as a kind of card game:

Fatigue: (Plays CRAMP and WINDED.) Ha, you’re not going to make it.

Character: (Plays STUBBORN.) Yes I am?

It’s that implied card game that gives the passage its compelling rhythm.

Since each move implies the next, Kemp doesn’t bother with “joining words”, that is he doesn’t bother to make each sentence connect to the next except by position. Imagine if he’d written:

The Vwynn behind him gained, closed on him, their snarls hot in his ear. Realising his impending doom, he prepared to turn, fight, and die.

Joining words and their baggage weigh down story. They take something the reader already knows viscerally, and spell it out boringly. They also slow down the narrative with redundant text. Worst of all, they eat writing time because they are impossible to do eleganty. Don’t use them.

Once airbound, the ship moved smoothly with a forward drift augmented by the periodic burst of the steam thrusters. Briar rose from her seat at the edge of the cabin and came to stand behind the captain so she could see the world outside and below.

They weren’t so high that she couldn’t distinguish the boats and ferries that trudged along the water; and when they crossed the line between water and land, Briar could tell which blocks were which, and even determine the streets. The Waterworks compound was flat and spread unevenly across the shoreline. The low hills and sharp ridges had houses perched on them, leaning into them; and here and there great horses towed the water carts from district to district, making the weekly deliveries.

She looked for her own house, but did not see it.

Before long, the Seattle wall loomed in front of them, curved, rough, and gray above the Outskirts neighborhoods. The Naamah Darling floated closer to it, and then past it, and began a course around it.

Briar almost asked, but Cly anticipated her concern. “This time of year,” he told her, “proper transport ships on legitimate business don’t go so close to the city. Everyone takes the northern pass around it, up over the mountains. If we look like we’re going to dip inside, it’ll be noticed.”

There’s a bit of semi-filtering in there. However it’s really there to make concrete the clarity of the view. For example, Priest could have written,

and when they crossed the line between water and land, it was possible to blocks identify individual blocks, and even determine the streets.

However that would have involved using “passive voice”, something writers reflexively avoid. It would also have been less immediate.

So. Back to NaNoWriMo.

You may be forgiven for thinking, “Oh #### two more things to worry about when writing.”

However, turn these two “rules” on their collective head. Think about what they let you do!

You can just dump sentences and paragraphs next to each other and the very reading order will lend them sense:

The alien spacecraft tore through the suspension bridge.  Wires snapped. The deck writhed, flicking cars high into the air. Eric cursed, willing the annihilator canon to charge itself.

If they don’t make sense, you can catch them on the second draft; at least you’ll have a first draft to work with! With writing it’s more efficient to leave stuff out and add it later if needed, than put lots of stuff in and later cut it. 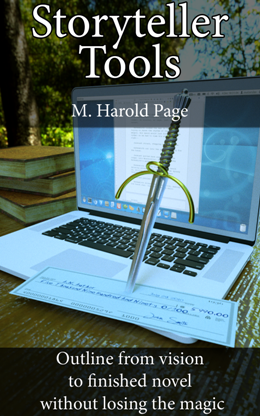 We can take this further and lay down a writing rhythm. In my book on planning and outlining,  Storyteller Tools: Outline from vision to finished novel without losing the magic,  I called this the World/Character Dialogue:

WORLD [Paragraph of external events seen from the character’s point-of-view and described using their voice.]

CHARACTER [Paragraph from the character’s point of view, beginning with visceral reactions , working through physical reactions and ending in speech or thought.]

That looks complicated , but really it’s just your point-of-view character in dialogue with the external world.

Bullets punched through the door, sprayed splinters into the room.

Blood splashed from Horsa’s chest, spattered the wall behind him.

Hengest dived for cover, rolled behind a control console, brought up his AK47 and let fly a three-round burst. “You killed my friend, you bastards!”

Steam spiralled dreamily from the surface of the herbal tea, just like the smoke from the peat fire at that rented Highland cottage last year where Jocasta had been happy for the first and last time.

Jocasta sighed and hunched over her book. Life went on, but not for her.

Of course, as we’ve seen, it doesn’t have to be paragraphs. It can be sentences or even clauses. What matters is that you get a rhythm going as you write so that you do write, rather than spend your stolen writing time tinkering…

M Harold Page (www.mharoldpage.com) is a Scottish-based writer and swordsman with several Historical Adventure franchise books in print. His creative writing handbook, Storyteller Tools: Outline from vision to finished novel without losing the magic is available on Amazon.

This might be the best writing advice I’ve read in at least 20 years. Yowza! I’ve some work to do. And thanks.

@Ty Thanks! (Email me if you want a review copy of the book.)

[…] Finding Your Groove in NaNoWriMo: The Rhythm of Writing […]