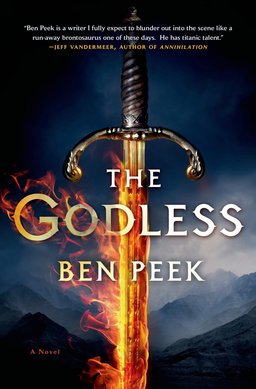 A fresh, fascinating story hides in this book. The gods are dead — their bodies litter the earth — but their powers leak into the lives of mortal men and women. And sometimes, tragically, children. Deific power is messy. One sprouts extra limbs, trails plagues in one’s wake, or combusts and takes out whole buildings. It’s a curse, isn’t it, to bear such power?

Ayae, a young apprentice cartographer, took refuge in a city built on a dead god’s bones when her homeland fell. Now an army of fanatics marches on her new home and those fanatics seem to want to wake the dead gods. What will Ayae do now that she’s cursed with the local god’s power over fire? She could be a doomsday weapon or a loose cannon that destroys the people she cares about. Her best hope for help in mastering her powers is a man so old he remembers the world as it was before the gods died, fifteen thousand years ago. He’s been wise. He’s been mad. He has done terrible things with the power that curses him. Ayae wants to trust Zaifyr, but he doesn’t always trust himself. The dead — human and divine — talk to him, and the dead have their own agenda.

Alas, the story is hiding, not in the sense of requiring a brisk readerly workout to piece the clues together, but rather in the sense of having been copyedited so poorly that it’s hard at times to figure out what the author is trying to make many of the sentences say.

I’ve written reviews before of books with lots of promise that could have used one last pass of polishing. This is not that.

Imagine that you’re getting dressed for a job interview, and you’re so nervous that you put your shirt on inside out. You ask your roommate (or, if you happen to be a book, your copyeditor) if you look okay. A good roommate will look up from his video game, tell you your shirt is inside out, and spare you embarrassment. If your roommate mumbles, “Yeah, sure, you look great,” without looking up, you’re not the only one to blame for how things go next. But at least your interviewer can tell that you had the right general idea, and you were trying.

But this book, this poor book, was not merely allowed to wander out of its apartment inappropriately groomed. This book got kicked out of its igloo into a howling arctic blizzard while wearing nothing but its underwear.

At a panel on the best books of 2014, I mentioned The Godless as one that could have been among the best of the year. It might yet, I said, if it turns out to have gotten one major pass of fixes between the Advance Reading Copy I have and the version that went out into the world. Please, I asked my fellow panelists, tell me there’s hope for The Godless. Not likely, they said. Not bloody likely, with the state of the industry today. Not even at an imprint of significance in a major publishing house.

So I went looking for other reviews, thinking perhaps that the problem lay with my excessive interest in grammar. Maybe the sentence-level errors that make me groan out loud posed no problem for other readers. But no. All over the Internet, readers describe Peek’s novel as “confusing.” As in, I can’t quite put my finger on why, but I found the story very hard to follow. I couldn’t tell when he was going into flashback mode, and I don’t know why. The characters seemed like they had a lot going for them, but they never came clear, and I don’t know why.

Knowing why changes how the problem manifests, but doesn’t save the book from having a problem.

Ben Peek knows what high formal styles feel like, and he knows when it’s appropriate for a character to shift into one. What Peek doesn’t appear to know is how to produce a high formal style, and that’s not really a thing that can be produced by feel. At exactly the moments when Peek wants the reader to experience the numinous, or a dread of the numinous, intruding from the ancient past, he trips. When Peek is lucky, the result is a clunky sentence. Sometimes he’s not so lucky and he produces pronoun reference errors and misplaced modifiers that force his sentences to say things that clearly were not his intent.

At other times, he has sentences adjacent to one another that appear to be remnants of different drafts because, although both are clear, they contradict each other on matters of fact. Is the exiled-baron-turned-mercenary injured in this paragraph, or isn’t he? That’s the kind of thing a writer might reasonably change his mind about from one round of revision to another. However, by the time a book goes to press, the question ought to be resolved.

I actually want to know about Baron Bueralan Le’s injury, and about the flashbacks he drifts into while he’s imprisoned. He’s a wonderful character, and the only reason he’s not the hero of The Godless is that he spends too much of this volume trapped in an impossible position. I hope to see what he does with his liberty as the series progresses. I actually want to know about Zaifyr, burdened by his fifteen-thousand-year lifespan, millennia of flashbacks and all. I care about how Ayae will deal with her neighbors in Mireea, those people she fought to save who recoil from the fire in her touch.

After twenty years of teaching teenage writers, I’ve learned how to read around problems like the ones in this book. There’s excellence here, if you happen already to have trained your eye to spot excellence even when it’s muddied. If your eye’s not already trained to that, The Godless may leave you as confused, and as confused about why you’re confused, as all those people writing reviews on Goodreads and Amazon were.

What went wrong? As Tor editor Teresa Nielsen Hayden observes in her wonderful essay “On Copyediting,” sometimes bad copyedits happen, to writers of all kinds. The book production process is complex, subject to external pressures, and conducted by human beings who can make mistakes. Maybe whatever went wrong with this debut novel can be avoided when the next volume of the series comes out. I heartily hope so.

Maybe, if we are all very lucky, someday there will be a new edition of The Godless, one in which the sentences all do what Ben Peek meant them to do. That would be a fine book. It might even, retroactively, get to be one of the best books of 2014.