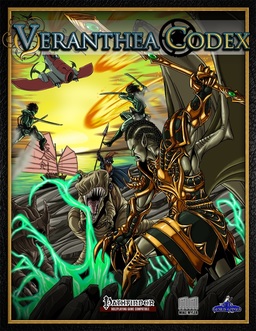 Today I invited Ennie award winning Mike Myer to swing by and tell us a little bit about a Kickstarter for his Pathfinder setting, Veranthea, now in its final weeks. Take it away, Mike:

Veranthea is a world that was born the moment I walked into a shabby house in Pittsburgh and played my first game of Pathfinder over seven years ago. It had been a few years since I’d rolled dice with Dungeons & Dragons — a hobby I took to fervently in my youth — and the world we walked into was without a name or real scope. Growing the setting organically, we rotated who was Gamemaster, each of us beginning to draw some color into the world until, after a few months, I was elected to be the permanent GM.

I couldn’t stop playing after that and, about a year and a half ago, published my first Pathfinder product. This started an obsession that has culminated in the Veranthea Codex: amazing, distinct worlds — of sword and sorcery, high fantasy, dieselpunk, steampunk, subterranean wild west, and esoteric science fiction — all on one bizarrely beautiful planet. While there are excellent fantasy settings throughout fiction and roleplaying games, none of them are like Veranthea. The classic sword-and-sorcery is there in Grethadnis, saddled up against burgeoning steampunk and pulp adventure. When the mood for a strong wuxia tale or campaign that resonates with Japanese folklore strikes me, the enchanted realm of Urethiel provides the means. Then there’s the dark stories, the gritty, gory sagas of rebellious struggle or monstrous tyranny—and I take the game to Trectoyri. The Forever Dark connects them all with spaghetti western pastiche, but the weirdest and strangest narratives happen far below the surface of the ocean, deep down in the technological, aquatic 5th World.

This method of organic creation has led to incredible characters, epic world events, unique gods, and innovative designs upon the world I never could have anticipated in that dilapidated dining room where Veranthea was born. To say that I’m enormously proud of what my hand-picked team of experts has already achieved with the preview content is an understatement — the Beztekorps makes my heart soar, Braxthar Grimdrahk makes me insatiably curious about what lies beneath Veranthea’s surface, the Master in Irons inspires a fervor for adventure, and Spoony Jawz is the kind of goblin I’d be excited to share a drink with (though I’d take care to make sure he didn’t follow me out of the bar).

From the war-footed nations of Grethadnis, to the imperial courts of the Grand Dynasties in Urethiel, to the smog-smoked streets of the sprawling metropolis of Goblinvania, my world offers players, GMs, and fans of good fiction one unified trait — a truly compelling world unlike any other you’ve ever encountered. It has already enthralled me for years; let’s find out just how much more fascination lies waiting in Veranthea!