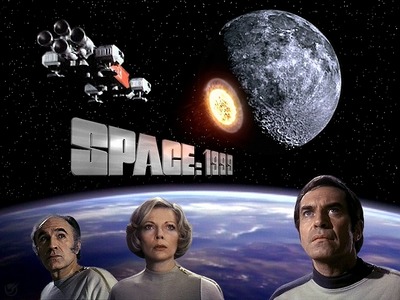 Over at SF Signal, Jeff Patterson recalls the tragic accident that hurled the brave men and women of Moonbase Alpha out of our solar system and into the cold reaches of space fifteen years ago.

On September 13, 1999, our dear Moon experienced a catastrophic nuclear explosion which hurled it out of orbit into deep space. It took with it the brave men and women of Moonbase Alpha. In the years that followed the Alphans encountered Joan Collins, Christoper Lee, Brian Blessed, and whip-wielding women in red catsuits.

Space: 1999 still gets a lot of flak for being cheesy SF TV, but one cannot understate the profound impact the show had on fans in the 1970s. It was the only new effects-heavy space-based show at the time, and a syndicated show at that. It had a fairly diverse cast, at least by 70s TV standards. It featured the distinct Gerry Anderson vibe that had made Thunderbirds and Captain Scarlet such eye candy, mostly due to the astounding effects work of Brian Johnson and Martin Bower.

As a child of the 70s, I remember racing home after school to catch the show in re-runs. The rockin’ theme music in the opening credits still gets me.