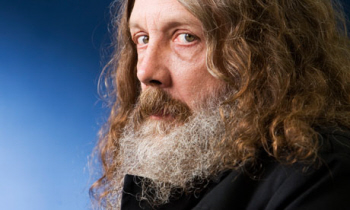 Alan Moore’s daughter Leah has posted a report on Facebook that her father has completed the first draft of his second novel, Jerusalem, and that the draft clocks in at more than one million words.

To give you a sense of perspective, that’s more than five times the length of Dune (186,000 words), and twice the length of all three novels of The Lord of the Rings (473,000 words). As The A.V. Club puts it, “Alan Moore wrote a novel so heavy even he can’t lift it.”

In some ways, the book sounds similar to his first novel, The Voice of the Fire, which portrayed 6,000 years of English history by following twelve different characters in the same region of central England. As Comics Beat points out, it’s also similar in some respects to his unfinished comic opus Big Numbers.

Alan Moore is the writer of some of the most famous comics of the 20th Century, including Watchmen, V for Vendetta, Swamp Thing, From Hell, and The League of Extraordinary Gentlemen. Moore does not yet have a publisher for the mammoth tome.

It sounds like he read William Blake’s nigh-unreadable long poem Jerusalem and thought to himself, “I can write a version that’s even more unreadable!”

Who wants to take my bet on Blake references galore?

Essentially he’s making a book on how to be a magician/occultist for young kids in the tween to teen years. Given his “Promethea” work I’ll suppose it’ll be a largely Crowley based paradigm.

I’ll love it just to see the bookstore wars… Let me try to do Burroughs, and I don’t mean the Tarzan/Mars one!

The animal house is in full swing. Everyone buy their McIdeals, there’s plenty to be had, more on order, and you can choose your cover variants. Buy a bible if you stand opposed, buy the book of magick if you support free speech and give it to your little brother. What’s worse, Pazuzu levitating him in the air and projectile vomit or the “Enemies of Free Speech” having a victory? Fanatic nut cakes protesting, a stack of KJV and other versions next to them. “Cool/Hip” kids in Hot Topic “Goth” gear buying the books and waving. Numb, crazy Evangalists handing out Chick Tracts… I take another book to one and suggest Mr Chick hire R. Crumb, look at how magnificently he did the Book of Genesis. He chokes but reads it, then starts laughing and laughing then crying.