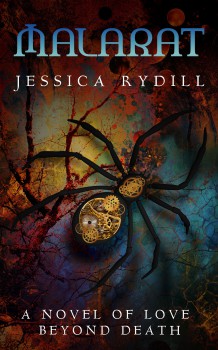 This month’s self-published novel is Malarat by Jessica Rydill. The book is the third book in Ms. Rydill’s shamanworld series, but also a standalone novel. The novel takes place in a world much like our own, with France (called Lefranu), England (Anglond), Jews (Wanderers), and Christians (Doxans). But these analogs are not exact (for example, the Doxans elevate Megalmayar, the Mother of God, to the position of a goddess) and there are also a number of things that are very different, such as the Great Cold, that isolated a portion of Lefranu so that it remained stuck in Medieval times while the rest of the world advanced to what most closely resembles the late 19th and early 20th century, complete with trains, firearms, and electricity.

The novel focuses on Annat Vasilyevich and her father, Yuda, two Wanderers who are also shaman, who have a number of magical (or psychic) abilities, such as communicating by thought, traveling to other worlds, and blasting things with shaman fire. They have been asked by the rulers of Masalyar, a large city-state in Lefranu, to investigate the rise of Clovis, a new claimant for the crown of Lefranu, who has the support of the Duc de Malarat, a powerful duke, and the Canes Dei, Doxan warrior-priests with a reactionary theology and an invention, the Spider, which they can use to overcome shaman. The Canes Dei are led by the beautiful but brutal Valdes de Siccaria. Yuda is a former Railway guard, who has connections among the Railway workers, but he was crippled in a previous adventure. He plans on disguising himself as a pilgrim seeking the blessing of the new king. They are accompanied on their mission by Yuda’s non-shaman son Malchik, Malchik’s lover, Camille, and their newborn daughter, Annat’s current lover Genie and ex-husband Cluny, Yuda’s apprentice Huldis, the railway workers Nico and Lukacs, and the nuns Sister Coty and Mother Kana. This is admittedly a large cast, but they soon split into smaller parties, with Annat and Genie staying in the city of Yonar in order to defend it. There they are joined by Casildis, Huldis’s sister, and her husband, Sergey Govorin, and the shaman Semyon Magus. The others continue on toward their fateful encounter with Clovis’s forces.

While Malarat told a whole story in its own right, it was clearly built on previous books, and there were frequent mentions of earlier events. I couldn’t help but feel like I was missing important context for things like Annat’s faerie eye, Semyon’s dark past, the goddess hidden in a doll, and the shape-changing crystal. In particular, all the characters have complex emotional interconnections, and I felt like having read more of their story would have made it easier to understand the relationships between the characters, such as the love triangle between Yuda, Govorin, and Casildis, or Annat’s relationship with her former husband, and the continuing friendship between Cluny and Malchik. Speaking of relationships, shaman are both bisexual and polyamorous. It’s not really explained why in this book, but it may have something to do with their powers—it seemed to be more than merely cultural. This appears to be one of the reasons Annat left Cluny, and why she doesn’t think her relationship with her female lover Genie can be exclusive indefinitely. Yuda also has both male and female lovers.

Malarat’s cover says that it’s a “Novel of Love Beyond Death,” and this is certainly an instance of truth in advertising. About halfway through the novel, several of the main characters die. Just as you think the story will be about the survivors and how they deal with the loss of their friends, the story then follows the dead characters into the afterlife. Apparently there is not one but many afterlives, and in at least some of them, the conflict continues—“as above, so below,” as the characters sometimes say. Time is fluid in the afterlife and the dead meet people from a more modern time, where they learn of the consequences of the events they’ve been part of. Fortunately, there’s an opportunity for them to make a difference, especially once the living travel to the realm of the dead.  The story continues into the underworld, and the quest to bring the dead back, recalled mythic themes, and the way that the events in the underworld and the living world tied together was well done.

I thought that the characters worked, and despite the number of them, their distinctive personalities came through well enough that I didn’t have as much trouble telling them apart as I expected early on. The prose is well-written, with strong, emotion-laden dialogue, though it seemed redundant at times, rehashing events which had happened on-stage without adding much in the way of new insight.

I did feel that the novel could have benefited from a tighter plot. The story was sprawling, with a lot going on (as you can probably tell by the character list a few paragraphs ago), and a lot seemed superfluous and unexplained, while other things seemed to come together too conveniently in places. The time periods of the cultures varied widely, between medieval and steampunk and modern, and though I knew that was part of the point, it still felt thematically inconsistent to me. But again, a lot of my confusion may come from the fact that Malarat really does need the previous books to provide context. In the end, Malarat may not work as well as a stand-alone novel as it does as the conclusion to a series.

Malarat is available from Amazon, Barnes & Noble, Kobo, and Apple iTunes for $2.99.