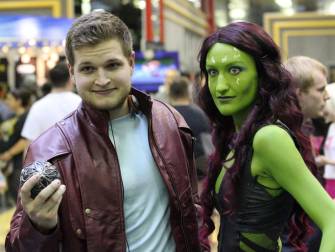 Last week and prior to the end-of-summer bacchanalia that is Labor Day weekend, we got half way through telling you all about the adventures kilt-clad Black Gate photog Chris Z and I had at the largest Wizard World Comic Con Chicago has ever hosted.

On the hottest weekend of the summer, with temperatures climbing into the three digits, we arrived at one of the city’s biggest convention centers and waded into a sea of vendors, artists, and cosplayers clad in unbreathing fabric which, in some cases, was stretched to the breaking point.

After agreeing it was about time to ask “The Boss” John O’ for hazard pay, we set about scoping the con’s coolest people and products to tell you about.

So here is part two; and let me say, we’re pretty excited…

In a Godless world where angels are evil, who would you pray to for help?

I have always had a thing for naughty angels, maybe because the concept is so counter to generally accepted thought. Whether it is the fairly nasty “Gabrielle” in Constantine, or the so-not-stereotypical Aziraphale from Pratchett and Gaimen’s Good Omens, I’m always intrigued by angels gone rogue. So it was no surprise that I pulled over for Jerrod Begora’s new book Angel Hunter.

Lucile is a devout Catholic woman who prays regularly for God’s help in finding her missing cousin, David, who has likely skipped town on a whim. After accepting help from a stranger, Lucile thinks her prayers have been answered. Unfortunately, she is far from the truth. Lucile is about to be swept up in an ancient battle between humans and angels where angels are evil and God is nowhere to be found.

Few know the reality, and even fewer summon the courage to fight against the angelic tyranny and help those in need. Meanwhile, cars are dropping from the sky, and God’s servants are in hot pursuit of Lucile and Andrew. Lucile, desperate to save her memories and find her cousin, is seemingly left with no other choice but to trust her quirky new friend who wields a gun and warns of impending disaster. Either God is good and sent the angel to test Lucile’s convictions or he is now using their lives for his amusement.

Torn between trusting her strong religious beliefs and the actions of God’s angelic army, Lucile knows one thing for sure-her cousin is in a lot more trouble than she ever imagined.

Angel Hunter, along with Begora’s other works, is available now on Amazon.

Husband and wife team Jack and Maria Gonzales have been Black Gate favorites for several years. Jack is the author and artist for two of our favorite comics, Pins and Needles and Midlife Monsters, while Maria is the talent behind the coolest bit of art that will ever grace your desktop.

Using her impressive crocheting skills, Maria creates handmade dolls of famous characters from TV and movies. Chris Z scored a Game of Thrones “John Snow” last year and called ahead this time to request Maria create a “Ygritte” doll to keep John company. Maria kindly obliged and I think you will agree, the result was pretty awesome. 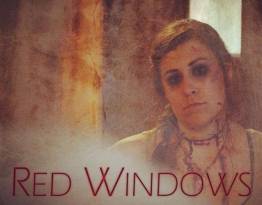 If you don’t see your favorite characters among Maria’s Dr. Who or Walking Dead offerings (among others), just contact her via Facebook and she’ll set you up with a Stitch Avenue original.

You know how much we love indy horror films so when Chris scoped out Red Windows in his pre-Black Gate trip to Comic Con on Friday night, it was the best news I’d heard all day.

Directed and written by Anthony Barnett and produced by Director of Photography C.S. Violette, Red Windows is a psychological thriller/horror movie filmed primarily in Chicago. The cast consists of a list of impressive young stage talent from right here in the Windy City.

The film is based on the story of Abby Mitchell, an impoverished young mother who sees increasingly disturbing evidence that someone has been entering her apartment. Friends and family are skeptical of Abbey’s story, but with no opportunity for escape Abby must face the ever-more-frightening prospect that she is being watched from a quiet neighboring house where all the windows have been mysteriously covered with red fabric.

Red Windows is in production now and is scheduled for release in 2015.

Keep watching their Facebook page for the latest news.

Of course, what would a Comic Con be without a few brushes with greatness?

This year’s Con was chock full of celebrities from movies and TV to the WWE, but it was clear the rock star of Wizard World 2014 was The Walking Dead’s Norm Reedus.

Guys were balancing girls on their shoulders to see over the massive crowd that surrounded Daryl Dixon, most dropping $80 for an autographed picture.

Meanwhile, on the opposite side of the hall, the entire cast of Star Trek: The Next Generation (sans Patrick Stewart who attended a reunion panel discussion on Sunday) was sitting shoulder to shoulder chatting with each other and the handful of fans who were lingering around the setup.

Which just goes to show how times have changed…

My own personal moment of wonder came when I had the chance to chat (very) briefly with legendary writer, composer, and director John Carpenter.

Tongue-tied fangirl that I am, I was only able to mumble something about loving his work and being honored to meet him before his publicist edged me away in favor of a more articulate reporter from ABC News.

Still, shaking hands with the creator of Halloween and The Thing pretty much made my day.

Artist and celebrity guests are already queuing up for the 2015 Comic Con circuit, so keep informed about their upcoming events in 17 cities at Wizard World’s official website.