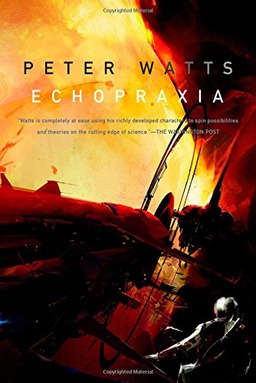 Peter Watts is a fellow Canadian and that makes him cool.

Well, that and the fact that he writes intensely cool SF novels, like the Hugo-nominated Blindsight, which Charles Stross described as “a first contact with aliens story from the point of view of a zombie posthuman crewman aboard a starship captained by a vampire.” Any time you can get Charles Stross on record saying “zombie posthuman crewman,” you know you’re cool. Plus, Ken Levine, the Creative Director for the hit video game BioShock, credits Watts as a significant influence on his game. That’s coolness right there.

Watts’s latest novel Echopraxia, described as a “sidequel” relating events on Earth during Blindsight, arrives at the end of the month, and Tor Books has been kind enough to offer us a copy to use as a giveaway (Thanks, Tor! You guys are super-cool.)

How do you enter? Just send an e-mail to john@blackgate.com with the title “Echopraxia” and a one-sentence review of your favorite Tor science fiction novel. One winner will be drawn at random at the end of the month from all qualifying entries and we’ll publish the best reviews here on the Black Gate blog.

All entries become the property of New Epoch Press. No purchase necessary. Must be 12 or older. Decisions of the judges (capricious as they may be) are final. Not valid where prohibited by law, or outside the US and Canada.

It’s the eve of the twenty-second century: a world where the dearly departed send postcards back from Heaven and evangelicals make scientific breakthroughs by speaking in tongues; where genetically engineered vampires solve problems intractable to baseline humans and soldiers come with zombie switches that shut off self-awareness during combat. And it’s all under surveillance by an alien presence that refuses to show itself.

Daniel Bruks is a living fossil: a field biologist in a world where biology has turned computational, a cat’s-paw used by terrorists to kill thousands. Taking refuge in the Oregon desert, he’s turned his back on a humanity that shatters into strange new subspecies with every heartbeat. But he awakens one night to find himself at the center of a storm that will turn all of history inside-out.

Now he’s trapped on a ship bound for the center of the solar system. To his left is a grief-stricken soldier, obsessed by whispered messages from a dead son. To his right is a pilot who hasn’t yet found the man she’s sworn to kill on sight. A vampire and its entourage of zombie bodyguards lurk in the shadows behind. And dead ahead, a handful of rapture-stricken monks takes them all to a meeting with something they will only call “The Angels of the Asteroids.”

Their pilgrimage brings Dan Bruks, the fossil man, face-to-face with the biggest evolutionary breakpoint since the origin of thought itself.

Looking forward to this book, and really nice to see it getting a great cover as well. That first ed Blindsight cover was so bad I wouldn’t hang it on my fridge to cover a bullet hole.

And it was a fantastic book, made me a fan.

You mean this one?

I didn’t think it was THAT bad… not very colorful, but at least it was different from all the other SF covers out there.

That’s the one! I suppose it being different is a point in its favor, but I cannot imagine that cover helped sell books. It doesn’t even look like something from a major publisher.

My only point being, when I read Blindsight I was baffled that it hadn’t made a larger splash, because it is fantastic. The cover is my number one guess as to why.

Dang! That’s got to be the biggest put-down I’ve ever heard for a book cover. Remind me not to make you mad Mr. Ward 🙂

Peter Watts is a fellow Canadian and that makes him cool.

Frankly, the Americans (or well, anyone, for that matter) are welcome to have him. I’d prefer not to have to share the same planet with the man, but wishes and fishes and all that sort of thing…

Plus, Ken Levine, the Creative Director for the hit video game BioShock, credits Watts as a significant influence on his game.

More evidence for the prosecution…

You’re awfully grumpy about a guy who gave us a free book to give away. As the Joker says, why so serious? Just curious.

*That James McGlothlin is so bad, I wouldn’t stand him up to block my view of the old Blindsight cover!*

You’re awfully grumpy about a guy who gave us a free book to give away.

I’m not a fan of Watts’ authorial voice to begin with, but, by contrast, I am very much a fan of the original Crysis game, so Watts’ contributions to the sequel’s novelisation, including a mid-21st century US Marine with the mindset of a 14-year-old 4chan Anon circa 2006, and the awkward retrofitting/recycling/regurgitating of his non-sentient/organic machine aliens concept from Blindsight onto the game’s extraterrestrial antagonists, did not sit well, to put it mildly, and speaking of Blindsight, the whole “vampires can’t stand right angles” thing is perhaps the most pants-on-head retarded attempt to divest the creatures of their supernatural aspects that could be imagined.

Also, if I may be completely superficial for a moment, Watts in person apparently looks like Michael Bay’s dissolute (or at least, more dissolute) older brother, so there’s that, too.

Actually, I’m going to elaborate a bit more. You see, in Crysis, the powered-armoured “nanosuits” that the game revolves around were, within the world depicted by the game, new and cutting-edge technology, but otherwise fairly mundane. The Americans had entire units outfitted with them. So did the North Koreans (AKA the Chinese). Presumably the Russians and other sufficiently advanced cultures did as well. The point, though, is that the nanosuited supersoldiers had a sense of utilitarian ordinariness to them. At the end of the day, they were simply normal men. They could die, and they could be replaced, even if the player-character’s actions were, at the time and place of the game’s plot, crucial to saving the world.

Now, in the sequel, by contrast, the nanosuits have inexplicably gone from being mass-produced, widely-available military equipment to a singular, unreproducible hybrid of human design and half-understood alien magic-tech, governed by an all-powerful A.I. that shuts down or override’s the wearer’s decision-making processes while in combat, thus allowing players to have their Master Chief//Commander Shepherd “Chosen One” bullshit demi-god protagonist upon whom, and only whom, the fate of the universe rests, and Watts to indulge his tiresome fixation on non-consciousness.