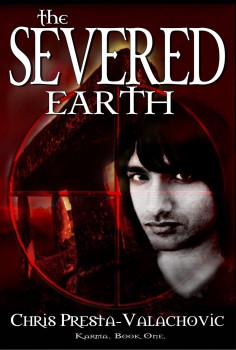 After a weekend spent trying to fix my computer (status: still crashing at least once an hour), it was an open question whether I was going to get this done. Well, here it is, hopefully not too much the worse for the wear.

This month’s self-published novel is The Severed Earth by Chris Presta-Valachovic. The Severed Earth is what is sometimes referred to as a portal fantasy, where characters from our world are transported to another one and are forced to deal with some great event. Sometimes the characters are quite willing, crossing over freely — in this book, they are definitely not.

The rock band Karma is in trouble. Despite the success they’ve had, their ex-manager Izzy embezzled most of the money before dying, leaving the members deep in debt. They have one chance to produce an album and turn their fortunes around, but their lead singer, Vao, is having a crisis of faith, and thinking of quitting after the death of his mother. The guitarist, Rafe, is fed up with Vao’s moping and unreliability and would just as soon be rid of him, while Jonathan just wants to hold the band together. Ian and Dylan just want to make music, but they, too, are stuck in this emotional train-wreck of a band. But when the record rep turns out to be a wizard, the band members soon find themselves with other things to worry about.

King Faolan of Kern is missing, and whether by coincidence or magic — it’s not entirely clear — Vao bears a remarkable resemblance to the missing king. He and his bandmates are brought to the land of Kern, Vao to take his place as king, and the others to take the fall for kidnapping him. The others manage to escape with the help of the bard Sion, but Vao is brought to the Crown City of Kern, where he is expected to assume the role of king, and in the course of a month, bond with a woman he’s never met and seal an alliance with the nation of Chulain. The others have the task not only of avoiding being captured and charged with kidnapping and murder, but rescuing Vao and finding the way home. Except that Rafe isn’t so certain that Vao is worth rescuing, and as time passes, it’s less and less clear that Vao wants to go home.

The people of Kern and Chulain worship the Land. The earth, the rocks, and the trees are all part of a mystic force from which the wizards, the geasarladh, and the healers, the miodhach, draw their magic. In return, they have to give back. Often this involves sex in the fields, but sometimes it involves blood sacrifice. Executed criminals are bled to death in the fields, while dark magic also requires blood. Shortly after arriving, both Jonathan and Rafe discover that they are geasadair, untrained magic users. Rafe finds that he is fairly skilled at magic, but Jonathan has a hard time learning it, to a large degree because he is unwilling to accept that his true talents are in healing.

Everyone believes that the band is from Ayo, the land to the south of Kern, and supposedly a harsh place. The Ayoans have turned their backs on the Land, and instead worship a strange deity (who will be pretty recognizable to the rest of us). Because of that, their Land is broken and reality is twisted, with places called the shadows of Ayo that are not real anymore. The natives of Kern believe that the band must come from one of those shadows, which would make Earth not a real place. This supposedly explains why the people of Kern speak English, and why the band speaks the same language with an Ayo accent. But that doesn’t really make sense if you follow it to its logical conclusion. The band is from San Francisco, and thus speak like San Franciscans, and if all Ayoans speak like that, it’s pretty much implied that San Franciscans are just imagining the rest of us. A more likely explanation is that these shadows are actually portals to other places, and the Ayoans are from San Francisco (give or take a couple of hundred years due to weird time effects of traveling between worlds). But no one, not even other Ayoans, seem to seriously consider this possibility, perhaps because it would mean that the standard explanation of Ayo’s problems — they turned their backs on the Land and the Land broke — is backwards. If there were no shadows, then San Franciscans couldn’t have come to Ayo in the first place, so the Land must have been broken before they came. Ultimately, these questions aren’t resolved in the book and the answer could be something entirely different, such as that seeming to speak like an Ayoan is part of the magic that brought the band there, and there’s no real connection between English and the language spoken in Kern.

Most of the band members, but particularly Rafe and Vao, have difficulty adapting to the world they’re in. At first, they try to deny that what they’re experiencing is real, blaming crazed SCA re-enactors or drugs, though eventually those excuses become too implausible even for Rafe. Even once they conclude they are in a different world, they refuse to play along, breaking the customs and rules — the ones they know — and not listening as people try to explain how things work and basically doing their best to get themselves killed. I can’t decide whether their behavior is realistic or just annoying, but there were times I was wishing I could slap them upside the head and tell them to stop being idiots. Vao eventually figures it out — it helps that he has the Blood Guardian watching over his shoulder, whose job is to kill the king if he can’t do his duty — but Rafe remains stubbornly unaccepting of this reality until the bitter end.

The Severed Earth mostly alternates viewpoints between Vao and the rest of the band, and each of the band members get their turn. It felt like Vao had the most POV time, but then, his story was separate from the others for most of the book, so even though Ian, for example, seemed to have the least PoV time, he still had plenty of time on-stage in the Jonathan’s, Rafe’s, and Dylan’s viewpoints. For the most part, the characters are distinctive and interesting. Vao has a lot of angst. He has some reason to be, with the recent death of his mother, but it is hard to disregard Rafe’s judgment of Vao as a self-absorbed, whiny rich kid. Though Rafe’s idea of what a rich kid is may be skewed, as Vao’s parents raised horses, and didn’t seem to be any better off than middle-class. Rafe, though, grew up on the streets. He peppers his language with Spanish insults and curses, and seems to spend most of his time angry. Jonathan tries to play peacemaker between them, mostly unsuccessfully. He’s the most stable of the band, and he’s the most eager to get home, having left behind his wife when brought to Kern. Ian and Dylan are the least distinctive. They tend to fade into the background, as might be expected of the bass player and drummer of the band. Dylan, at least, reads fantasy, so he seems to be the most accepting of this situation. Ian, though, also adapts more readily than Vao, Rafe, and Jonathan, which allows him and Dylan to blend in better and figure out at least some of the mysteries while the others are caught up in their own issues. This gives them a significant role collectively, but there were times when I forgot which was which until Dylan started quoting “Jabberwocky”.

The set up felt a little long, and it took a while before the main characters had learned enough to be useful (in particular, the useful vs. annoying quotient for most of the characters was low at first). Things picked up a lot near the end as the heroes found their legs and started figuring out what was really going on, and I had a hard time putting the novel down as it reached its conclusion. A lot of what drew me on, even through the early, difficult parts, were the mysteries, and there certainly were plenty. Why does Vao look like King Faolan, and why does Faolan’s mother resemble Vao’s mother, and Faolan’s uncle Donn the band’s corrupt manager Izzy? Who brought the band to Kern and why? What is the Blood Guardian’s game? What is the connection between Earth and this world? A lot of these questions are never answered in the book, or only partially so. Hopefully, they will be addressed in the promised sequel.