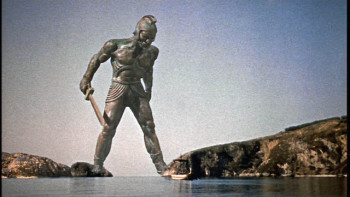 If you saw the 1963 version of Jason and the Argonauts, you probably remember this scene. It’s classic Harryhausen: stop-animation work that was looks cartoonish now, but was state-of-the-art at the time.

Like some of the other episodes in this movie (Skeleton battle!) you may have thought that this was all Hollywood. But Talos, the gigantic bronze guardian of Crete, was described in the Argonautica as well. Apollonius tells his readers that Talos was the last of the race of Bronze (mythical predecessors of modern humans), and that Zeus had set him to guarding Crete as a favor to his lover Europa. Since he was made entirely of metal, he was completely invulnerable, except for one spot on his heel where a thin membrane of skin covered his vein.

Here the similarities between the book and the movie end. How typical. In Jason and the Argonauts, Jason unscrews the bolt in Talos’s heel, releasing the steaming blood that keeps the giant animated. 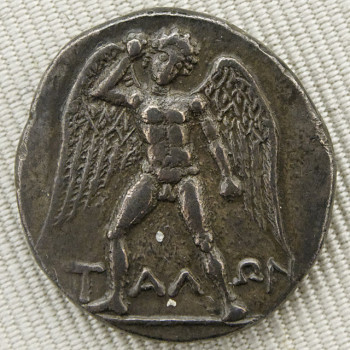 As we know by now, Jason could never have figured that out by himself. Instead, in the original work Medea begins furiously casting magic, and Talos tears open his heel on a rocky cliff and bleeds to death.

That girl never gets a break in the adaptations.

Talos has provided inspiration for millenia and it’s not hard to see why. To the best of my knowledge, he is the earliest account of anything resembling robotics: a giant metal man who is destroyed by essentially mechanical means. While he has the shape of a man, he has no other real human attributes: he fulfills a single function, he does not speak, and is accorded no emotions by the narrator. He is for all intents and purposes an automaton.

Since the Argonautica was written well before automata were seriously conceived of, there has been speculation of where the inspiration for Talos came from. Some scholars simply think that Apollonius was playing with the notion of Bronze Age men, a myth that comes from Hesiod and which is intended as a metaphor of the decline of man from his earliest Golden Age to the decadent present. Of 600 BCE. Robert Graves, among others, suggested that Talos was inspired by a misunderstanding of an image depicting lost wax casting.

Clearly, they were both wrong. Apollonius was inspired by what he learned about ancient Egyptians, aliens, and advanced cybernetics at the library of Alexandria.

Whatever his origins, as the first threatening metal man, you can draw a line from Talos all the way to the Cylons. In fact, the United States military has announced an effort to build exo-skeletal armor for infantry use called TALOS: Tactical Assault Light Operator Suit. Which has more in common with Iron Man’s exoskeleton than our bronze friend here, but we’ll take the credit when it’s offered up.

Next time, the difficulty of endings when the ending is really, really bad. Meanwhile, I’ll be taking suggestions on what works you’d like to see covered or discussed!

I am obviously most comfortable with Classical subjects, but I’m eager to branch out, so help me find new things to talk about.

Hmm, growing up I had always considered Talos to be a depiction of the Colossus of Rhodes, sprung to life.

Admittedly though, it’s been a very long time since I saw this movie, although I often think about seeing it a again.

Were I not boycotting Amazon I’d go and buy a copy, if it’s available