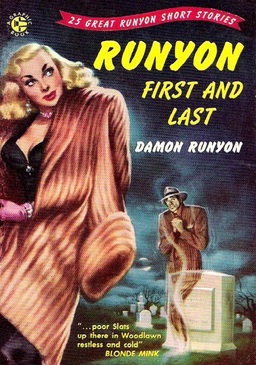 It was Chicago writer Steven Silver who introduced me to Damon Runyon, with his hilarious Cthulhu-Runyon mash-up “In the Shadows of Broadway,” published as a podcast in StarShipSofa #236 in May, 2012. Since then, I’ve been acquainting myself with Runyon’s comedic short stories, several of which were the basis for the famous Broadway musical Guys and Dolls.

Runyon First and Last is a fine sampling of his earliest and later stories, including his last, “Blonde Mink,” published in Collier’s Magazine in August, 1945, the tale of a ghost who cannot rest until his fiancé buys the headstone she promised with the $23,000 he left her… and the strange fate of the blonde mink coat she bought with the money instead. Hilarious and sad, it’s unlike any other fantasy you’ve ever read.

This is a collection of 25 short stories by one of the truly great writers of American fiction. Six of the stories presented here were written during Runyon’s earliest phase. They are technically expert and have a non-Broadway background.

Among his later stories, his last, titled “Blonde Mink,” sets a new high in the art of short story writing. It displays the full flower of that Runyonese which perfectly conveys the flavor of Manhattan’s high-flying guys and dolls.

“The Informal Execution of Soupbone Pew” is the story of the revenge wreaked upon a vile vicious character who killed a kid who had been popular with a gang of tramps and hobos.

The kind of writing included in this collection clearly shows the reasons for Damon Runyon’s world-wide reputation.

Runyon First and Last was published in paperback by Graphic Publications in 1951. It contains 27 stories of the 39 stories included in the 1949 hardcover edition. It is 189 pages; there is no cover price. The cover is uncredited. I bought my copy on eBay last month as part of a collection for just under one dollar.