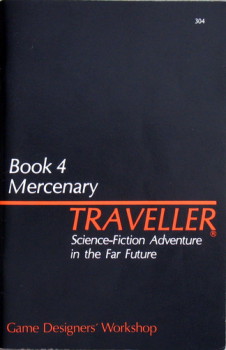 In previous posts, I may have mentioned that, as a kid, there were three roleplaying games that I liked – and played – above all others: Dungeons & Dragons, Traveller, and Call of Cthulhu. I played lots of other games, too, but these were the ones that most strongly captured my imagination. Because I played these three so much, I was also a voracious consumer of supplementary materials produced for them. Of course, being a young person, my funds were limited; I had to be judicious in what I purchased. Consequently, I tended to put a priority on items I deemed to have the most overall utility. This meant, in the case of AD&D for example, that I placed greater value on hardcover rulebooks than on adventure modules (though I still bought plenty of adventures over the years).

My appetite for such broadly “useful” supplements was practical, since my friends and I played RPGs a lot. We were young and well nigh addicted to this weird new form of game. During the summer months, we quite literally played all day long, from the time we got up until the time the sun set, taking brief breaks only to scarf down some food before returning to the table. I’d conservatively reckon that, in terms of raw hours of play, my friends and I had probably played more than had many of our elders who’d started roleplaying years before us. That’s the nature of youth, as we had the free time to indulge our boundless enthusiasm in a way that most people do not.

I hesitate to say that, because we played so much, we more quickly became jaded than did many of our peers, but it’s probably true nonetheless. We were constantly on the lookout for ways to take our campaigns in new directions, to stoke the flame of our RPG ardor. The first supplement that I remember achieving this was Book 4: Mercenary for GDW’s Traveller. My friends and I started playing Traveller with The Traveller Book, which was released in 1982. That book alone was enough to keep us busy for many, many months of science fiction adventure in the far future. However, we did eventually want more out Traveller and Mercenary fit the bill, providing us with new skills, equipment, and – most importantly – expanded rules for generating Army and Marine characters.

Mercenary changed the way we played Traveller forever. Previously, Merchants, Scouts, and Navy personnel were favored, because these careers were all space-based and thus what we considered to be the stuff of sci-fi. But Mercenary-generated characters were so much better than those generated using the original system. They had more (and better) skills, as well as lots of fun perks like advanced training and commendations. Our campaigns quickly shifted gears to focus on ground-pounding mercenaries involved in interstellar brush fire wars (which, as it turned out, was how nearly everyone else we knew played the game). Mercenary had a profound impact on us and extended the life of our ongoing Traveller campaign considerably. 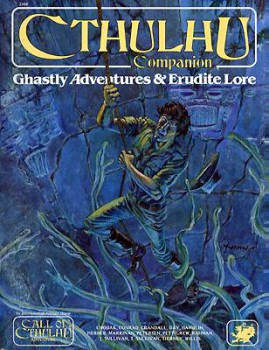 The Cthulhu Companion was released in 1983, two years after the release of the original Call of Cthulhu boxed set. From the moment I purchased that set, I was in love. Call of Cthulhu was (and is) one of my favorite RPGs of all time, in large part because I was already a fan of Lovecraft by the time the game came out. The older guys who used to hang out in the hobby shops I frequented regularly talked about Lovecraft, citing him as an important influence on D&D. I’d come across his name a few times here and there (including in the pages of Dragon), so it was a no-brainer that I’d pick up and enjoy a game based on his writings.

I don’t think my friends ever loved Call of Cthulhu as much as I did. A big “problem,” I suspect, was that, as initially presented, it was not merely a RPG of cosmic horror, but a historical game of cosmic horror. Though the rulebook noted that individual Keepers (as they styled the game’s referee) could set their campaigns in any time period, it would be some time before Chaosium supported anything but the 1920s in its scenarios and source material. My friends were gung-ho to take on eldritch abominations whose stirrings threatened to destroy human civilization. Doing so during the Jazz Age, however, wasn’t as big of a draw. They played the game somewhat grudgingly, mostly because I wanted to run it. Their hearts weren’t really in it, though.

The Cthulhu Companion changed that a bit. I wish I could say it did so because its contents either provided support for campaigns set in the later 20th century or because it had an amazing adventure in its pages that really highlighted how cool the Roaring ’20s were as a historical period. The sad truth is that it was the book’s cover painting (by Chris Marrinan) that made all the difference. Whereas the original 1981 rulebook depicted Call of Cthulhu investigators as reporters and academics, the Companion gave the impression of their being more like Indiana Jones: bold explorers venturing into forgotten tombs in search of treasure and knowledge. Combined with the lengthy article by Richard L. Tierney (yes, that Richard L. Tierney) on “The Cthulhu Mythos in Mesoamerican Religion” and you have the recipe for a very different take on Lovecraftian horror. 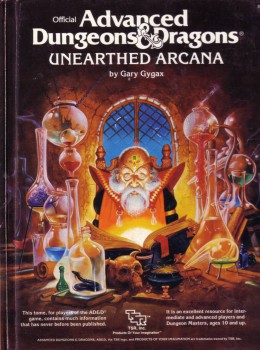 I don’t think I ever looked forward to a RPG book more than I did to Unearthed Arcana, released in 1985. I’d reading Gary Gygax’s “From the Sorcerer’s Scroll” columns in Dragon for years. The ones that were of most interest to me were those that provided sneak peeks into what he had planned for the fabled second edition of Advanced Dungeons & Dragons. These sneak peaks included all manner of terrific bits and bobs, most notably new characters classes (like the barbarian, thief-acrobat, and cavalier) and new spells for every magic-using class. I’d already adopted many of these rules additions into my own campaign, so I was very excited that they were now going to appear within the pages of a hardcover tome intended to be a companion to the Players Handbook.

Despite this, I was strangely disappointed by Unearthed Arcana. Its contents were (mostly) what I had expected. There was very little there that actually surprised me. Indeed, if I had, beforehand, come up with a table of contents of what I wanted to see in its pages, I don’t think there’d have been a huge difference. After all, nearly everything in the book was something I’d already seen before in Dragon or that Gygax had hinted was coming. Somehow, though, seeing them all together and firmly canonized as part of AD&D lessened the material in my eyes. I really wish I could say why.

Some of it, no doubt, was the fact that, by 1985, my love affair with Dungeons & Dragons generally (and AD&D in particular) was on the wane. I’d been playing non-stop for close to six years and I was looking for new horizons. By all rights, I ought to have seen Unearthed Arcana as providing just that, since it greatly expanded the scope – and power level – of the game. Instead, it felt like more of the same stuff I’d seen for years. I used to think this was because the material in the book was bad (or at least badly designed), but I’m not sure that’s fair. Certainly, the contents of Unearthed Arcana doesn’t hold much appeal to me now. But in 1985? This should have been my dream tome.

Unlike Mercenary or the Cthulhu Companion, Unearthed Arcana was a game changer by being something I didn’t want. Or perhaps I should say that it simply failed to be what I hoped it would be. Even now, I’m not entirely sure what it was that I hoped the book would be. I know only that I once loved D&D without ceasing and, by the time, Unearthed Arcana came out, I no longer did. It would take years before I loved it again with the same passion I did in those heady early days. It’s unfair to lay the blame for that on Unearthed Arcana, even though I did for years afterwards.

These are a few of the game changing products in my memory. What are yours?

For me, High Guard and Trillion Credit Squadron. I never actually played all that much of any RPGs, but I spent untold hours designing cruisers and dreadnaughts.

TSR’s Marvel Super Heroes, and everything that came out for it. And I mean the original yellow box (which I recently was gifted a copy of). As a fan of the comics, but a player of only D&D up until then, this was my first real, post-D&D RPG love. I haven’t played it in years, but I still remember it more fondly than any other RPG experiences of my teens. In fact, I just recently self-published an “update” to it of sorts at RPGNow.

I can SO relate to your posts, especially in your comment above about the hours upon hours of summer RPG play. That was my group as well in junior high.

I got out of gaming by 1985 before Unearthed Arcana arrived on the scene. But before this, our group usually had several copies of Dragon lying around when we played D&D because we were constantly incorporating new rules, spells, classes, monsters, and ideas from its pages. So I can completely understand your let-down about Unearthed Arcana.

Neither Traveller nor Call of Cthulhu were a big part of our group. But we also played a ton of games, including those, such as Gamma World, Gangbusters, Star Frontiers, Top Secret, James Bond 007, Indiana Jones, and even Toon.

The thing that really changed our gaming group’s focus was not a supplement but the discover of super hero RPGs. We played Marvel Superheroes and Champion. But we found Villains and Vigilantes to be the best of the bunch.

I think we were most drawn to superhero RPGs for two reasons: (1) We realized that the game world it provided was the most easily realizable flexibility: we could play it like a sci-fi game, a time traveling game, go back to a D&D-like world, etc., and (2) There was a lot of source material (i.e. comic books) to draw ideas from, which also got us into comic books at the time.